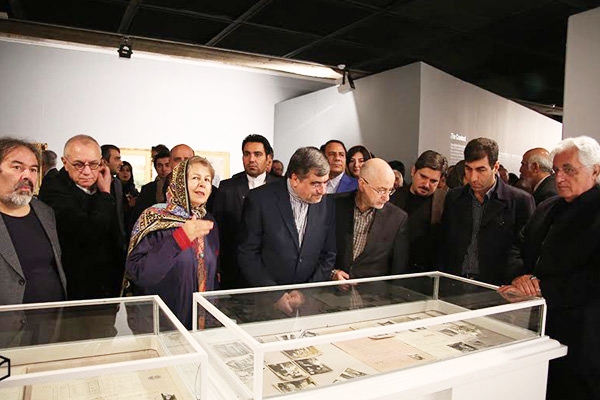 The culture minister has said that the Joint Comprehensive Plan of Action can prepare the ground for Iran to have interactions with the rest of the world in different areas such as culture and art.

The minister of culture and Islamic guidance has said that opportunities have emerged for closer cultural ties between Iran and the rest of the world, adding that other countries including Italy are seeking to have cultural interactions with the Islamic Republic.

Ali Jannati made the remark at a ceremony in the Tehran Museum of Contemporary Art (TMOCA) on Friday to preview “In Quest of the Missing”, a collection of artworks by the late Farideh Lashai, a painter, writer and translator. Honaronline.ir on November 21 published a report on the ceremony which was also attended by Deputy Culture Minister for Artistic Affairs Ali Moradkhani and a host of Iranian and foreign guests, and remarks by the culture minister there.

The following is the translation of part of that report:

The culture minister said that Farideh Lashai is a world-class, influential artist, adding this exhibition which brings together her works from different centers and collections is of great significance.

Jannati pointed to the conclusion of the Joint Comprehensive Plan of Action (JCPOA) and said that JCPOA has undoubtedly had an impact on political, economic, cultural and artistic fronts. “It can set the stage for development of culture and art, and establishment of international interactions between [nations on different fronts including] culture and art.”

The minister then expressed hope that his ministry can introduce and promote Iran’s art to the world more than ever.

The culture chief also said that the letter of understanding the Tehran Museum of Contemporary Art has signed with Germany’s Prussian Cultural Heritage Foundation shows that the stage is set for artistic interaction [between Tehran and Berlin], adding that other nations such as Italy have called for [showcasing] TMOCA artworks and for the cultural interactions between with Tehran.

Majid Mola Norouzi, the head of the Culture Ministry’s Visual Arts Department, addressed the same ceremony and said the exhibition at the museum is different from the previous ones for having two Italian and Iranian curators working together.

He added that Mr. Germano Celant – who is a top European curator – and Ms. Faryar Javaherian will jointly be in charge of this exhibition.

As many as 130 works of Farideh Lashai, including paintings, video arts, glassworks and crystal designing, will be on display along with 40 other works at the Tehran Museum of Contemporary Art (November 21 – February 26).

Farideh Lashai, born in Rasht in 1944, came to Tehran with her family in 1950. At 19, she went to Germany to continue her studies. For a while she studied at the Academy of Fine Arts in Munich and then went to the school of translation.

While in Germany, she was inspired by Bertolt Brecht, a German poet. In 1966, she went to Austria and worked in the Riedel Company, a famous glass company in southern Austria, where she also learnt crystal designing and engraving.

In addition to creating artistic works, Farideh Lashai spent a lot of time on literature. She held her first solo exhibition in 1974 in Tehran Gallery which mainly focused on nature.

In the 1990s and 2000s, she had a stronger presence in the Tehran Museum of Contemporary Art.

[Farideh Lashai is renowned for her abstract contemporary paintings, which are a combination of traditional and contemporary views of nature.]