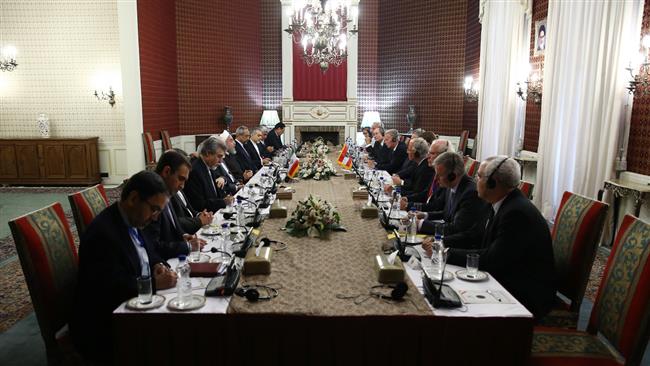 Iran’s President Hassan Rouhani says a nuclear agreement reached between Iran and the P5+1 group of world countries will be beneficial to countries in the Middle East and Europe.

“After the nuclear agreement, the Islamic Republic of Iran is set to increase its efforts more than before for stability and security in the region and the world and we believe that stability and sustainable security will be in the interest of Europe, the region and the [entire] world,” Rouhani said in a meeting with visiting Austrian President Heinz Fischer in Tehran on Tuesday.

On July 14, Iran and the P5+1 countries – the United States, Britain, France, China, Russia and Germany – finalized the text of a nuclear agreement, dubbed the Joint Comprehensive Plan of Action (JCPOA), in the Austrian capital of Vienna.

Rouhani added that the agreement carries the message of “peace, friendship, dialog, cooperation and future development of the region and the world.”

The Iranian president also said the nuclear agreement provides Iran and Austria with an opportunity to enhance their cooperation.

“Today, after the nuclear agreement, an appropriate opportunity is created to improve our cooperation proportionate to the nations’ demands and existing potentialities,” Rouhani said.

He added that no obstacle can hinder the expansion of Tehran-Vienna ties and noted that bilateral cooperation would help strengthen mutual trust.

Fischer, for his part, said Austria is an independent and impartial country and is fully ready to boost its ties with Iran in different sectors.

The Austrian president expressed hope that his visit to Tehran would lead to lasting mutual relations.

Meanwhile, senior Iranian and Austrian officials on Tuesday signed four documents for strengthening bilateral cooperation in the presence of the two countries’ presidents.

The Iranian minister of industry, mine and trade, Mohammad Reza Nematzadeh, and Austrian minister of science, research and economy,Reinhold Mitterlehner, also inked an agreement on holding the 8th meeting of Iran-Austria Business Council.

The Austrian president arrived in Tehran on Monday at the head of a 240-member delegation at the invitation of his Iranian counterpart with the purpose of discussing ways to improve Tehran-Vienna relations.