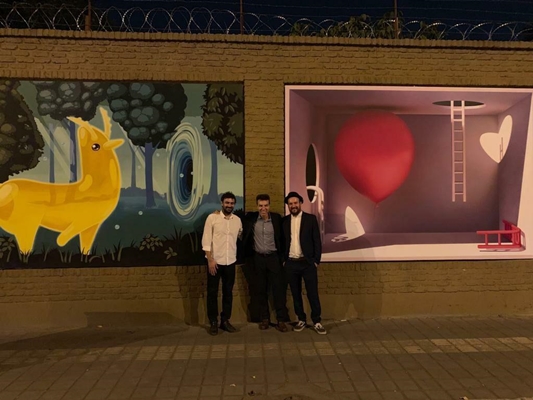 The exterior wall of the Italian Embassy in Tehran is playing host to a joint Iran-Italy artistic project.

A ceremony to unveil the project was held at the residence of the Italian Ambassador to Tehran Giuseppe Perrone Thursday evening.

He touched upon the importance of arts, saying art is a key communication method among world nations.

The top diplomat underlined that the project is slated to run until 2020. He said two works of art by Iranian and Italian artists are scheduled to be displayed on the exterior wall of the Italian Embassy every two months.

He said the project aims to boost cultural proximity between the two countries, and added cooperation between Iranian and Italian artists is interesting.

Meanwhile, an Iranian official described art as the common language of nations.

“There are many cultural commonalities between Iran and Italy, and the Italian Embassy’s move to hold such ceremonies show authorities at the Italian Embassy in Iran are so prudent, and I hope that this project will continue in other cities as well,” said Hamid Moqaddami, the mayor of District 1 of Tehran.

Mahdi Qadyanloo, an Iranian artist who has participated in this project, says what motivated him to contribute to the artistic initiative was the current political situation in Iran.

“As a graduate of Arts, I am very interested in the Italian art,” he said.

The Italian painter who has taken part in this program also said he and his wife found out after travelling to Iran and Iranian people are very hospitable. He added urban art makes cities beautiful, and said he hoped the project would continue.