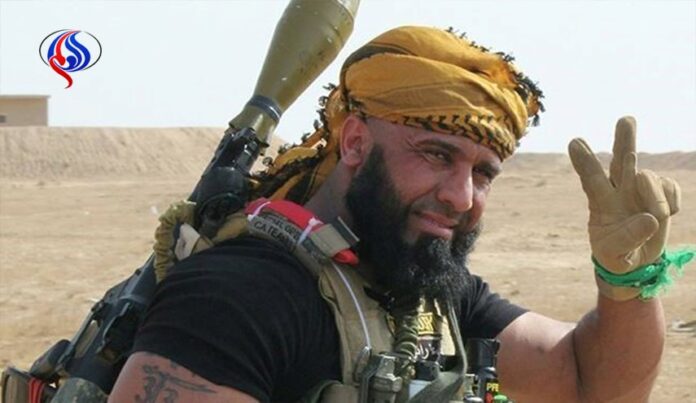 A recently-released video shows “Abu Azreal”, the famous commander of Iraq’s Popular Mobilisation Units (PMU), on the border between Syria and Iraq.

The video, published on the websites affiliated to the PMU, confirms that the well-known commander, Ayyub Faleh Hassan al-Rubaie – known by his nom de guerre as “Abu Azrael” – has arrived in Iraq-Syria border area and is currently in the region.

Literally, Abu Azrael means Father of the Angel of Death. He has become a public icon of resisting the ISIS terrorist group in Iraq among Shia Iraqis.

In this video, Abu Azrael is seen along with a number of his companions, while pointing at the Sinjar Mountains in northern Iraq and also al-Adnaniyah district, on the Syrian territory.

Al-Adnaniyah district has recently been retaken from ISIS by the Popular Mobilization Units. The victory has helped significantly reduce the distance between the Iraqi PMU forces and the Syrian border.

In an audio message on Monday, the second-in-command of Iraq’s PMU, Abu Mahdi al-Mohandis, congratulated the popular forces on their arrival at the border between Iraq and Syria and their success to expel the ISIS terrorists from the Iraqi territory.

In his message, Abu Mahdi also praised the sacrifices made by the martyrs, PMU fighters, and war veterans.

During the rule of former Iraqi dictator, Saddam Hussein, Abu Azrael was arrested and sentenced to death. Nevertheless, prior to the execution of the sentence, he managed to escape. His nickname, “Abu Azrael”, has been given to him by the Iraqi people.

Having a master’s degree in physical education, according to some sources, he used to be a university lecturer in Iraq and a one-time taekwondo champion.

Nevertheless, after the beginning of the ISIS crisis in Iraq, determined to defend his home and country, Abu Azrael joined the Iraqi ‘Imam Ali’ brigade belonging to the Badr Organization.

With the arrival of the Iraqi hero, morale is high among the Iraq’s resistance forces, who appear confident in ridding ISIS from Iraq.

The PMU forces have been fighting ISIS terrorists in Iraq since 2014.