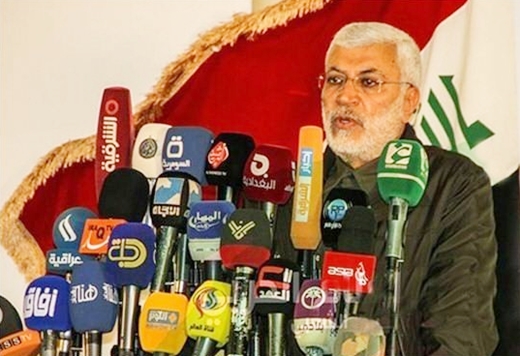 The Deputy Head of the “Popular Mobilisation Committee”, the Iraqi popular forces fighting against ISIS terrorists, stressed that General Qassem Soleimani, the Commander of IRGC Quds Force, is in Iraq at the official request of the Iraqi government.

In a Saturday May 28 interview with Iraqi TV channel Al Sumaria, as covered by Fars and translated by IFP, Abu Mahdi al-Muhandis emphasized that Iraq does not need anyone’s help to expel terrorism.

He noted, however, that the presence of Iranian military advisors, including General Soleimani, is solely based on the official request of the Iraqi government.

His remarks seemed to be in reaction to Saudi Arabia and Bahrain, who had recently criticized the “negative” role of General Soleimani, and expressed their opposition to his presence in Iraq.

“Iranian advisors, at the head of whom is my dear brother Qassem Soleimani, have stood by us [in Iraq] since the beginning of the war, […] and their presence was permitted by the commander of the Iraqi Armed Forces,” he said.

General Soleimani himself had earlier stressed that Iraq does not need the interference of others. Iranian Foreign Ministry Spokesman Hossein Jaberi Ansari also announced on Friday that the Islamic Republic has an advisory presence in Iraq at the request of the Baghdad government.