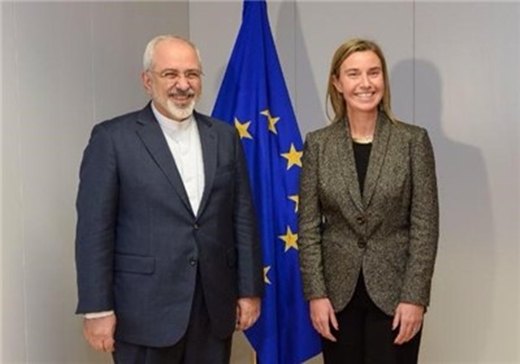 In a phone chat at the request of the EU foreign policy chief, Zarif and Mogherini talked about the latest developments in nuclear talks between Iran and P5+1.

The telephone conversation was made at the request of Mogherini.

The Iranian foreign minister is now in Switzerland’s Davos to attend the 45th annual meeting of the World Economic Forum (WEF).

Zarif is also scheduled to hold talks with his counterparts from P5+1 (Russia, China, the US, Britain, France and Germany) on the sidelines of the Davos meeting.

Earlier this week, Zarif said that the forum in Davos provides an opportunity to have “short discussions” on Iran’s civil nuclear program with top diplomats of P5+1, including US Secretary of State John Kerry.

The EU foreign policy chief is tasked with coordinating diplomacy with Iran on behalf of the six countries.

Last week, Iran and P5+1 (also known as E3+3) wrapped up the latest round of negotiations in Geneva, Switzerland, with the next round slated for early February.

The negotiations between Iran and P5+1 aim to hammer out a final agreement to end more than a decade of impasse over Tehran’s peaceful nuclear program.

Meanwhile, nuclear negotiating teams from Iran and the US are scheduled to hold talks on Friday and Saturday, January 23-24 in the Swiss city of Zurich.