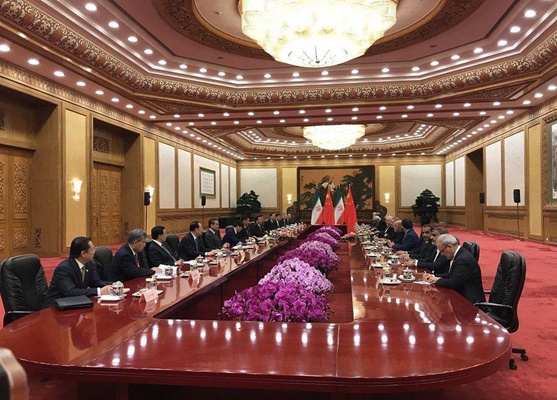 Iranian Parliament Speaker, Ali Larijani, and the Chinese president, Xi Jinping, in a meeting in Beijing have stressed that the ties between the two countries must be expanded.

In the Wednesday meeting, Iran’s parliament speaker described China as one of Iran’s reliable partners and praised the long history of amity between the two nations.

For his part, the Chinese president emphasized the importance of broadening strategic cooperation with Tehran in all fields of mutual interest.

Larijani is on an official visit to China. He is accompanied by a high-level delegation including ministers, lawmakers and other senior Iranian officials.

Earlier, in a separate meeting with National People’s Congress of the People’s Republic of China, Li Zhanshu, Larijani over the past two thousand years, the relationship between the two countries has never been tense.

In turn, Zhanshu said that the visit of the Chinese President to Iran was a turning point in the relations between the two countries, during which strategic agreements were signed and it shows the determination of the two countries for long-term cooperation.

Before this meeting, Iran’s Parliament Speaker Addressed students and professors at Renmin University of China in Beijing, saying that unbridled unilateralism is not acceptable to world nations, particularly Iran and China, in the 21st century.

Lashing out at Washington, he added the United States seeks to hit other nations, including the civilized people of China and Iran, by adopting a hostile attitude towards other nations in various economic forms, including unilateral sanctions, and the imposition of trade tariffs on exports of countries. Of course, it will not succeed, because in the 21st century, uncontrolled unilateralism is unacceptable to nations, especially the civilized people of China and Iran, and they will never accept it.

“The Islamic Republic is ready to provide the friendly country of China with our country’s unique capacities in various fields including infrastructure, energy, etc, to cooperate in belt-way project. In this way, we can move together to jointly build a belt-way and create a community with a common destiny. Also, on behalf of the people of Iran, I declare the readiness of Iranian parliament to use the parliamentary capacity of the two countries to play a joint role in belt-way project,” noted Larijani.

Elsewhere in his remarks, Larijani underlined that Tehran expects the remaining parties to the nuclear deal to fulfill their obligations under the Joint Comprehensive Plan of Action (JCPOA).

“Although the parties to the nuclear accord have turned down the illegal US request and tried to save it, we expect them to protect the pact and honor multilateralism,” he stressed.