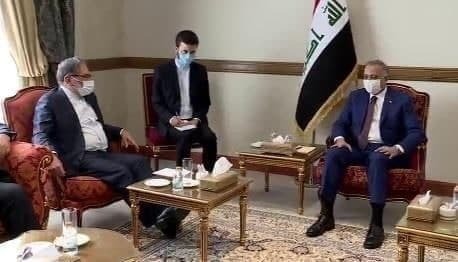 A top Iranian security official has called for the immediate expulsion of terrorists from Iraq, saying they are detrimental to the stability of the region.

Ali Shamkhani, the Secretary of Iran’s Supreme National Security Council, in a Sunday meeting with Iraqi Prime Minister Mustafa al-Kazimi in Tehran described the increasing movements of terrorist groups in the Iraqi Kurdistan region as worrying and disrupting the security of the borders of the two countries.

He also spoke of the cooperation of compromising countries of the region with Israel, saying, “Such actions within the framework of the new US national security doctrine not only does not help create security and stability, but will escalate crises and intensify insecurity in the region”.

He added that twenty years of catastrophic US occupation of Afghanistan proved that the US presence and intervention in the region has resulted in nothing but instability, insecurity and great material and spiritual damage to the people of the region. Shamkhani maintained that following up the case of the assassination of the great resistance commanders of martyrs General Qassem Soleimani and Abu Mehdi Mohandes and punishing its perpetrators is still at the top of the demands of the two nations of Iran and Iraq and the Resistance Front.

Iraqi Prime Minister Mustafa al-Kazimi also said the Iraqi government and people will never forget the sacrifices and assistance of the Iranian government, people and armed forces in that difficult situation in Iraq.

Al-Kazemi noted that the continuous cooperation between the national security institutions of the two sides in various fields complement and accelerate the relations between Iraq and Iran, saying Baghdad is ready to help resolve misunderstandings that are detrimental to regional stability.