Iran’s Missile Program Poses No Threat to Any Country: Diplomat

Hamid Baeidinejad, a senior official at the Iranian Foreign Ministry, stressed that Iran’s missile program serves the country’s national interests and is no threat against any country, especially in the Middle East.

Speaking to reporters a day ahead of the first anniversary of the signing of a nuclear deal between Iran and six other countries, Baeidinejad, who was a negotiator at the talks that led to the deal, said on Wednesday, July 13, that Iran’s missile program is defined in completely defensive terms.

Responding to a question about recent opposition by certain Western parties to the Iranian missile program, Baeidinejad said, “We cannot set the country’s national interests based on others’ viewpoints.”

The United Nations (UN)’s Secretary-General Ban Ki-moon has drafted a report on a UN Security Council resolution that endorsed the deal, known as the Joint Comprehensive Plan of Action (JCPOA), claiming that Iran’s missile activities are in violation of the “constructive spirit” of the agreement and the resolution. 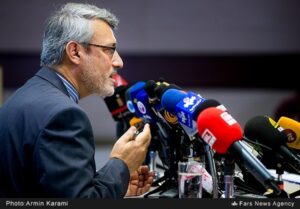 In his Wednesday remarks, Baeidinejad said the draft report on Resolution 2231 is “highly imbalanced,” expressing hope that the version of the report to be officially published will be “balanced and comprehensive.”

Commenting on the state of the implementation of the JCPOA, Baeidinejad said the process has been “satisfactory to some extent.”

“As of now, the members of the negotiating team believe the JCPOA has not been breached” by the other sides, he said.

Iran and the five permanent members of the UN Security Council — the United States, France, Britain, China and Russia — plus Germany signed the JCPOA on July 14, 2015 following some 23 months of intensive talks.

Baeidinejad expressed his hope that “with negotiations and consultations, the likelihood exists for the resolution of the problems.”

He said the Iran-Group 5+1 Joint Commission on the JCPOA — which monitors the implementation of the deal — is to convene next week in the Australian capital, Vienna.