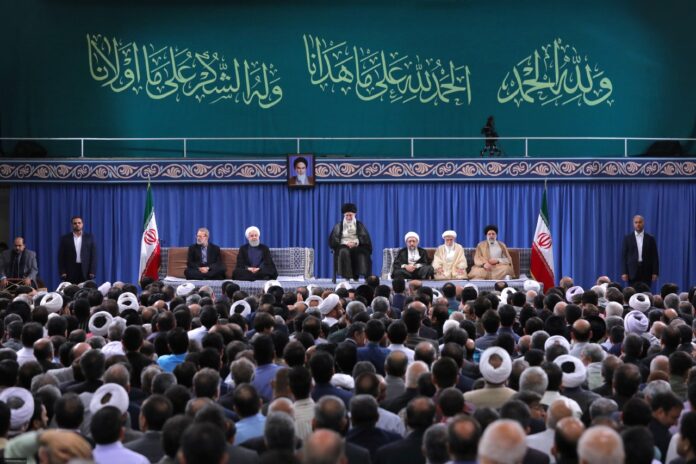 Leader of Iran’s Islamic Revolution has urged Muslim nations to band together against the Israeli regime.

Ayatollah Seyyed Ali Khamenei made the comment in a meeting with a host of Iranian authorities, ambassadors of Muslim countries and people from all walks of life on Wednesday.

The Leader touched upon the enemies’ machinations to pit Muslims against one another and trigger wars among them.

“Instead of confronting each other, Islamic countries should line up against the criminal presence of the usurper enemy (the Israeli regime) in [occupied] Palestine,” Ayatollah Khamenei underlined.

The Leader said some Islamic countries seek to compromise with the Israeli regime and sow discord among Muslims, urging them to “repent of the improper path they have chosen.”

“Why in a country like Libya should two groups stand up to each other and shed the blood of one another, and why should a country which claims to be an advocate of Islam bombard the people and infrastructure of Yemen and act in accordance with the enemy’s will?” Ayatollah Khamenei asked rhetorically.

The Leader said the cause of Palestine is the most pressing issue of the Muslim world.

He blasted some Islamic countries for working in line with the objectives of the US and the Israeli regime.

“From the outset, the Islamic Republic of Iran stressed the need to defend the Palestinian nation and stand up to hegemonic powers and will continue this resistance,” Ayatollah Khamenei said.

He underlined that the Palestinian nation will emerge victorious, urging Palestinians to push ahead with their all-out struggles against the Tel Aviv regime.