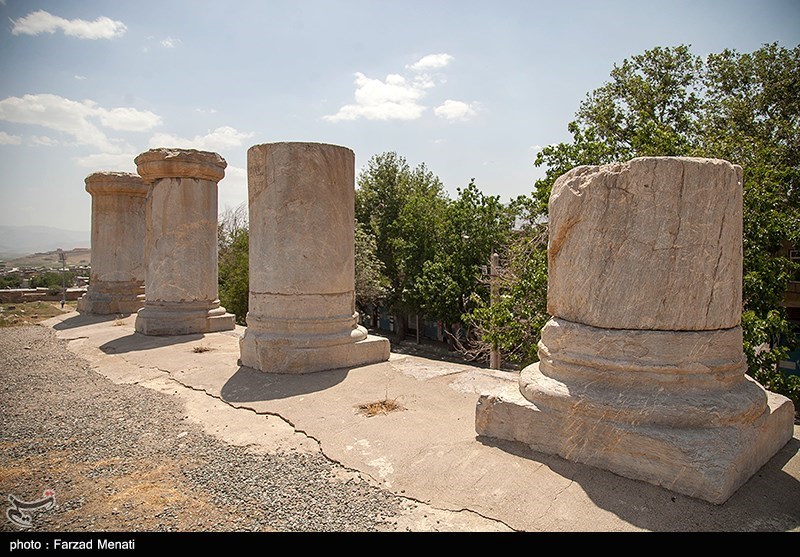 The Temple of Anahita, an ancient monument dating back to the Parthian era (247 BCE – 224 CE), is the second stone building of Iran.

The Temple of Anahita is located in Kangavar, in the middle of Hamadan-Kermanshah road in western Iran, on the historical route of Ecbatana to Ctesiphon.

Based on historical records, this temple- the second stone building of Iran after Persepolis–  has been used as a fire temple to honour Anahita, the ancient Persian goddess of water, during Achaemenid, Parthian and Sassanid periods.
The ancient Iranians considered Anahita to be the guardian of water; the angel of abundance, beauty and fertility who had an elevated position.

Water and the goddess of water are focused in the building’s architecture. The corridors around the temple beautifully led the water to a square pool in the centre of the structure.

Heads of four bulls have been placed face to face on both sides of the temple, whose images reflected in water when the pool was flooded, making a legendary atmosphere.

A large number of burning marks exist on the stone plates of building, proving that it has been a temple.

It is not possible to determine the exact construction date of Anahita Temple, nor its type of use, architectural space and actual body, but it is attributed to the Parthian era. This great historical monument has been subject to several natural disasters, as well as both inadvertent and intentional human destruction.

What follows are Tasnim’s photos of the temple: