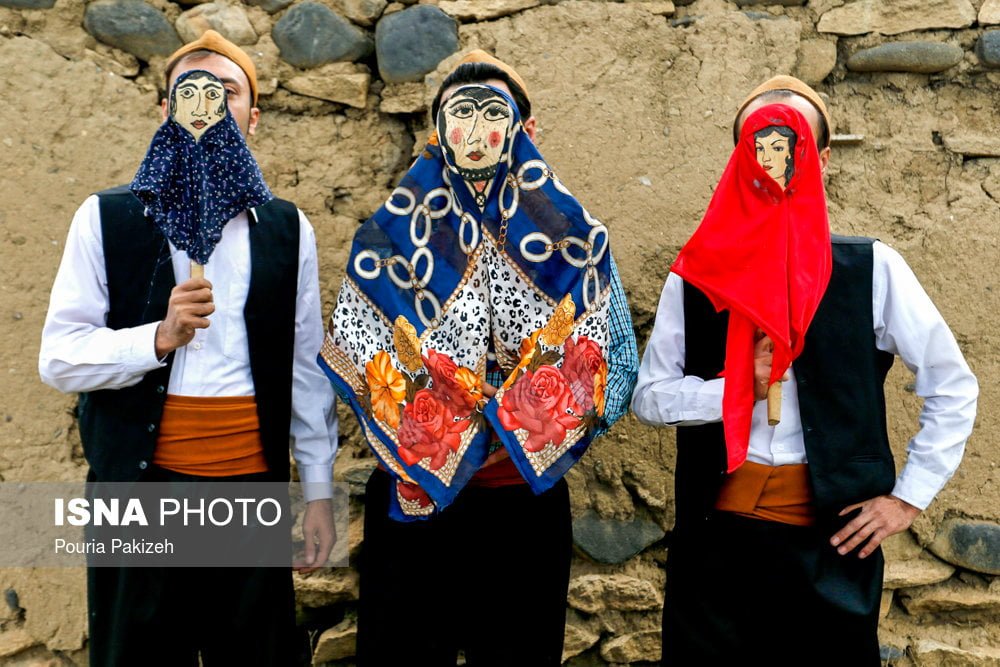 At the end of the cold season, people in the Hamadan Province gather together to conduct traditional rituals to usher in the promise of spring and the new Iranian year,Nowruz.

One of the rituals performed in the province to celebrate Nowruz is “Kusa” (also known as Kusa-Galin).

The ritual is practiced by groups of mummers, or the troupes of actors (also known as guisers) who visit people in disguise, walk from house to house, greeting their hosts, staging a sort of a play, sometimes performing a fertility magic rite, and collecting gifts in kind or in money as part of the festival.

Kusa is usually among the characters in the troupe accompanied by his rival (the white and the black Kusa), his bride (a boy disguised as a girl), a number of assistants, and some musicians.

The scenario includes a fight (in the form of chub-baazi) over the bride between Kusa and his rival, possibly her kidnapping, the death of Kusa, the girl’s lament over his body, and his revival.

The songs sung by the Kusa group comprise wishes of well-being for the household, a description of its prosperity, a plea for a gift, blessings and gratitude to the donors (or a curse for the mean ones).

This tradition, which may be traced back to the age old death-and-resurrection myth, has been reported by early Islamic authors such as Masudi and in some more recent, secondary texts. Even Zoroastrian texts that mention the ritual appear to be based on Islamic sources, according to Encyclopedia Iranica.

There are striking parallels between the Kusa and East European Christian caroling traditions.

The ritual, practiced in western, northwestern, and central parts of Iran, been inscribed on the Iran National Heritage List.

One of the other rituals practiced in Hamadan and many other Iranian provinces is “Chomchomeh-Galin”.

The rainmaking ritual is conducted by children dressing up a big wooden spoon called Chomchomeh as a doll, naming it Chomchomeh-Galin.

Walkinghome to home while carrying the ChomchomehGalin, children bid the winter farewell and herald the new year, demanding gifts for their propitious news.