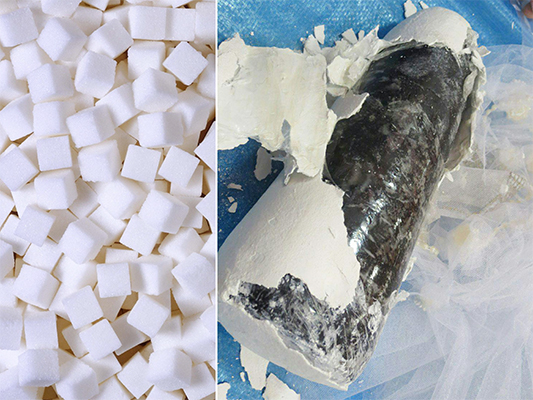 A sugarloaf containing 2.4 kilograms of opium has been discovered by Customs officers at Imam Khomeini International Airport in the Iranian capital.

Customs officers at Tehran’s Imam Khomeini International Airport in the Iranian capital have seized 2.406 kilograms of opium smartly concealed in a sugarloaf, according to a Farsi report by IRIB News Agency.

The chunk of opium was shaped into a conical sugarloaf, coated skilfully with sugar. Despite efforts to disguise the large piece of opium as a sugarloaf, the customs officer were vigilant enough to find and seize it.

According to the latest report by the Regional Intelligence Liaison Offices (RILO) – World Customs Organization, Iran’s Customs Administration (ICA) ranks first worldwide in terms of discovering and seizing narcotics smuggled to and from the country.

The report says the ICA has put in the best performance among the customs administrations of other countries in fighting and discovering drugs, including industrial, traditional and psychedelic drugs as well as opioid-based pills. Hong Kong, Japan and New Zealand stand second to fourth in this ranking.