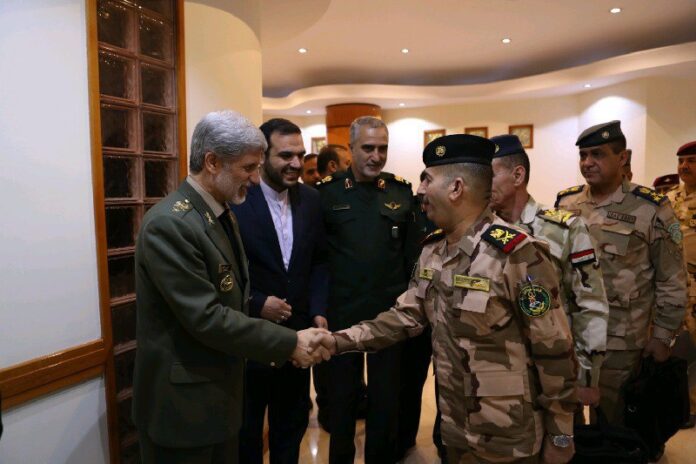 Iran’s defence minister says if it weren’t for Iran’s cooperation, Iraq would have been disintegrated by ill-wishers and enemies of peace and security.

Brigadier General Amir Hatami made the remarks in a Thursday meeting with commanders of the Iraqi Navy, Air Force and air defence units.

He also touched upon the current political-security situation in the Middle East region and across the world, calling for closer collaboration between Tehran and Baghdad.

“The threats and opportunities facing the two countries make it all the more necessary for their military and state officials to hold further consultations in order to secure the interests of both nations and boost economic growth and development of the two countries and ensure stability and security in the region,” said the top general.

He said a heavy price has been paid to ensure stability and security in the region.

“The blood of faithful, dedicated and patriotic Iranian and Iraqi youth guarantees the stability and security of both countries,” said the top general.

Elsewhere in his remarks, he touched upon Washington’s putting Iran’s Islamic Revolution Guards Corps (IRGC) on the list of terrorist groups.

“Calling the IRGC a terror group by the US was in revenge for the IRGC’s actions against terrorism in Iraq and Syria. With this move, they intended to prevent the trend of political-security stabilization in Iraq and Syria, and care should be taken in that regard,” he noted.

He said Iran-Iraq defence cooperation will ensure balance, peace, stability and security in the region.

“The two countries are determined to boost mutual relations,” he said.

In the meeting, Iraqi military top brass expressed content over their visit to Iran, stressing the need to further reinforce bilateral defence cooperation based on the principle of good neighbourliness as well as political, security, religious and social bonds between the two countries in conformity with the interests of both nations.