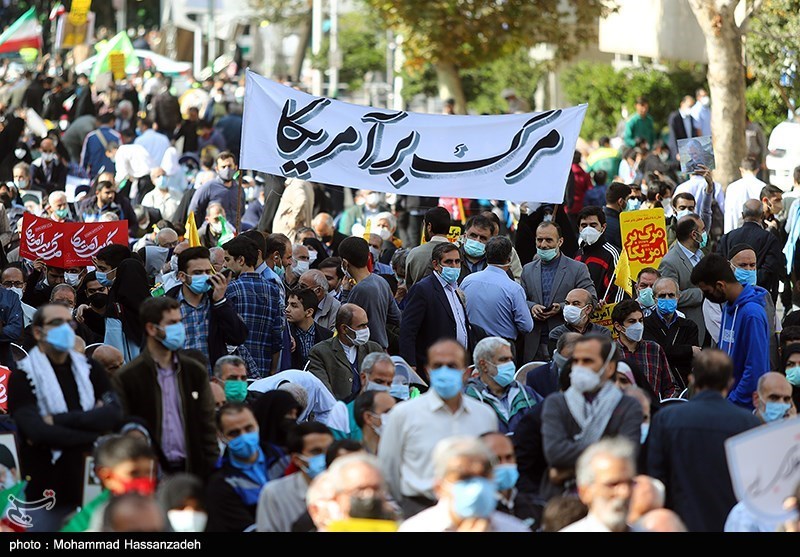 Iranians have staged a mass rally in the capital, Tehran, to commemorate the anniversary of the 1979 takeover of the US embassy there.

Demonstrators gathered outside the former US embassy building with the following motto: The Iranian nation’s resistance is key to the decline in the US’ hegemonic dominance.

The ceremony is being held in conformity with coronavirus health protocols.

“The US has been a factory producing all dictators of the world,” Major General Hossein Salami, the commander of the Islamic Revolution Guards Corps (IRGC) told the participants in the gathering in Tehran.

“The US has 750 military bases across the world to establish its political domination over the world, each of these bases, with a circle of political influence, has tried to create an all-encompassing political dominance in the world,” he added.

“Also on the United States’ track record are the production of torture machines and sending them to all dictators and offering torturing techniques to imprison justice- and freedom-seekers around the world,” he explained.

The top commander said Washington used Iran under the Shah, the former Iranian dictator, as one of the pillars of the US strategy to secure its domination over West Asia.

General Salami noted the US has launched more than 40 major wars around the world, namely wars against countries in Europe, Africa, South America and the Middle East as well as against Russia.

He added the US has been defeated by the Iranian nation, adding Washington does not regard these failures as an object lesson.