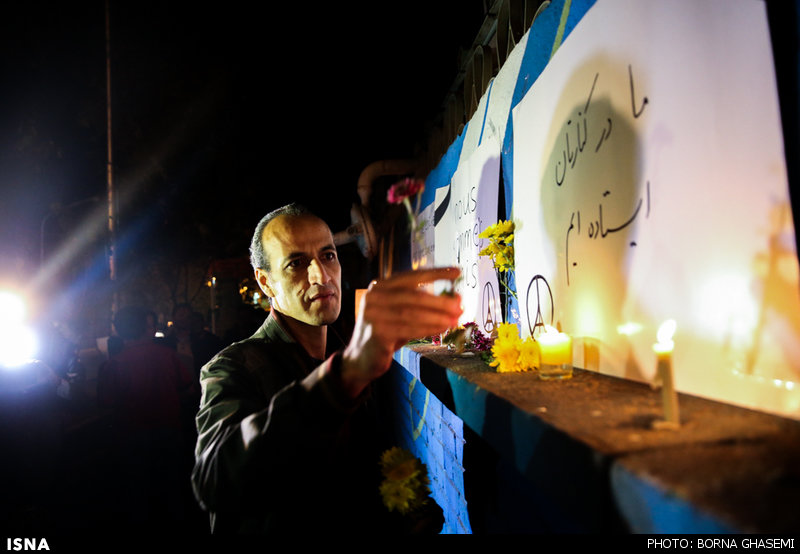 In a message to the French president, President Rouhani has condemned Paris attacks and expressed condolences to the families of the victims and the French government.

The Iranians have expressed solidarity with the French people following the deadly terror attacks in Paris carried out by the IS militant group.

The Iranians on Saturday paid tribute to those killed or injured in the attacks and extended their condolences to the families and friends of the victims of the attacks by gathering in front of the French embassy in Tehran.

They laid down flowers and placards which read: “We stand by you” and “We are united” in Farsi, in French and English in front of the building.

The IS terror group claimed responsibility for assaults, which were carried out by gunmen and suicide bombers in several venues, including a concert hall, restaurants and the national stadium in Paris.

French President Francois Hollande denounced the assault, which killed nearly 130 people, as an “act of war.”

President Rouhani sent a message to his French counterpart, condemning the attacks.

“In the name of the Iranian nation, itself a victim of the evil scourge of terrorism, I strongly condemn these inhumane crimes and condole with the bereaved French nation and government,” President Rouhani said in his message.

Other countries, including the United States, Russia, Britain, Germany, Spain, India, Australia, and Turkey, as well as the European Union (EU) have voiced their condemnation of the attacks.

According to the latest details provided by Francois Molins, the Paris prosecutor, 129 people were killed in the Paris terror attacks while 352 others suffered injuries. He added that at least 99 people are still in critical condition and that seven terrorists had died.

The French capital was targeted in another series of terrorist attacks as recently as January 7, when gunmen attacked the Paris offices of French magazine Charlie Hebdo, killing 12 people and wounding 11 others.

The incident was followed by a series of sieges and shootings across Paris, resulting in the killing of more people and an extensive sense of insecurity in the country.