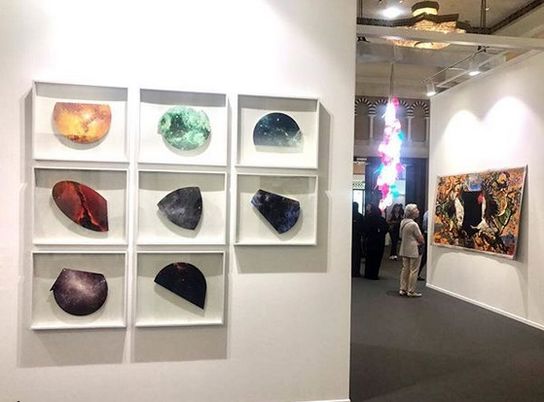 Iranian artists made their presence felt at a major Dubai art event back in March, receiving compliments from visitors.

The 12th Dubai Art Fair was held in the United Arab Emirates (UAE) on March 21-24, 2018. The exhibit is an international art event showcasing works of art from the Middle East, Africa and South Asia. The event has displayed contemporary works of art from the region over the past few years. This year, the fair hosted 105 galleries from 47 world countries. Iran attended the exhibit with 5 galleries, namely Arya, Khak, Dastan, Mohsen and Abanbar, displaying Iranian visual arts.

Arya Eqbal, the director of the Iranian Arya Gallery, said Arya was the only gallery at the exhibition to display works of art with the theme of “lifeless nature” by eight Iranian modernist artists, including Kamalolmolk, the founder of the modernism school of art in Iran, Bahman Mohasses, Garnic DerHagopian, Farideh Lashaei, Parvaneh Etemadi, Leili Matin-Daftari, Manouchehr Yektaei, and renowned painter and poet Sohrab Sepehri.

According to a Farsi report by Honar Online, id most of the visitors were not Iranian and, interestingly enough, knew Iranian modernist artists very well, he added.

She described the Dubai Art Fair as a good opportunity for displaying Iranian works of art. He further described this year’s show as very good, saying she received very good feedback from visitors.

“On the whole, the exhibition had a wide-ranging audience, and in addition to Arab countries, visitors from European countries were present at the event, as well,” said Matnifar.

“Seven Iranian galleries attended the Dubai fair last year, and 5 galleries this year, making their presence felt at the event. The more the number of the galleries and the higher the quality of their works, the stronger Iran’s presence will be, and international audience will begin to get a better picture of the events taking place in the arts sector in Iran,” she said.

Hormoz Hemmatian, the manager of the Dastan Gallery, said Iran’s art of book-making was put on show at the event. According to Hemmatian, big books the pages of which could be turned over by visitors were on display. The works of art by several artists were put on display by the gallery.

“Iranian exhibitors were among the most important participants at the exhibition and displayed very good works,” he noted.

Ehsan Rasoulof, the director of the Mohsen Gallery, said it was the second time the gallery was taking part at the Dubai Art Fair.

“Like the previous year, the Mohsen Gallery, this year, too, displayed works of art by two young artists – Sara Abbasian and Majid Biglari – which had a common essence and were driven by the same motive,” he said.

Rasoulof said some of the works displayed by the gallery depicted violence in the human society and the life of the contemporary man.

“Our objective was to introduce artists and the gallery on the one hand, and, on the other, to create an opportunity to sell the works of talented young Iranian artists on the arts market of the Middle East. Our pavilion was received very well, resulting in the positive feedback of the organizers, critics and curators,” he said.

“The number of the Iranian galleries [attending the fair] this year was less than that of last year, but was much better quality-wise, something that all the organisers and audience acknowledged,” said Rasoulof.