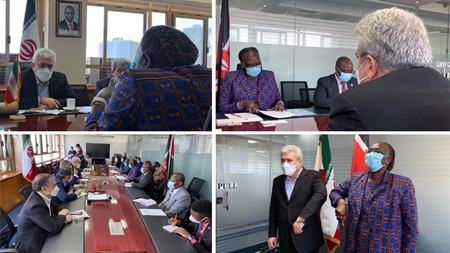 Iran's Vice-President for Science and Technology Sorena Sattari and Kenyan Minister of Industry, Trade and Cooperatives Peter Munya have discussed promotion of technological cooperation between the companies of both countries.

During the meeting, which was held on Thursday during VP Sattari’s three-day visit to the African country, the two sides stressed the importance of enhancing mutual relations.

“Iran’s technological moves have gained momentum since the beginning of the tenure of the 12th administration, so that we are able to boost the country’s scientific progress,” said Sattari.

“We pulled it off using domestic knowhow and the expertise of our youth,” he added.

“Over the past years and within the context of technological and innovative ecosystems, more than 6,000 knowledge-based and innovative companies took shape, and their sales amounted to around $12 billion,” the Iranian vice president said.

“Major start-ups have been set up in our country and they export their products to other countries as well,” he noted.

“[Teams from] 40 knowledge-based firms are accompanying the Iranian delegation in this trip. These companies can be a good link for the transfer of Iran’s technology to Kenya,” he said.

“Representatives of Iranian companies had discussions with 130 Kenyan companies and had face-to-face meetings. These meetings will result in bilateral cooperation,” said Sattari.

He added Iran can share with Kenya its experience in the field of technology and sci-tech parks.

“Iran enjoys a special status in the domain of emerging technologies in the world. For example, Iran ranks fourth in the world in terms of nanotechology,” said Sattari.

He urged Iran and Kenya to run joint projects in the domain of technology and know-how transfer.

He also noted that Iran kept moving on the path to progress despite cruel sanctions.