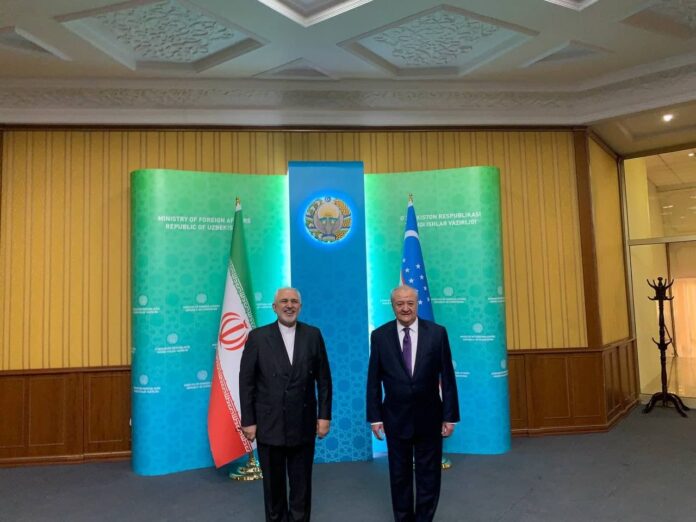 Iranian Foreign Minister Mohammad Javad Zarif met his Uzbek counterpart Abdulaziz Kamilov in Tashkent on the first leg of his Central Asian tour, which will later take him to Kyrgyzstan, Kazakhstan, and Turkmenistan.

In the Monday meeting, the Iranian top diplomat reviewed the two countries’ relations in various fields, especially economic ties, trade exchanges, and collaborations in the fields of transportation, transit, and energy as well as the need for tapping into the existing capacities and its economic feasibility.

Foreign Minister Zarif also discussed political issues between Iran and Uzbekistan, the existing grounds for cultural and tourism collaborations, and avenues for promoting mutual cooperation in the aforementioned areas.

Kamilov, in turn, stressed Iran’s regional position and international influence, and highlighted the significance of Tehran-Tashkent collaborations in various fields including cooperation at international bodies, parliamentary cooperation between the two countries’ parliamentary friendship groups, collaborations in the fields of transport and transit, and using the port capacities of Iran along the coasts of Persian Gulf and Sea of Oman.

The existing capacities for cooperation in economic, transport, and logistical fields are beyond the current level of ties between the two countries, Kamilov said, highlighting the necessity of expanding mutual cooperation.

The two sides also exchanged views on the US’ unilateral and cruel sanctions against Iran, Tehran-Tashkent cooperation in the Afghan peace process, and their collaboration at legal-international bodies.