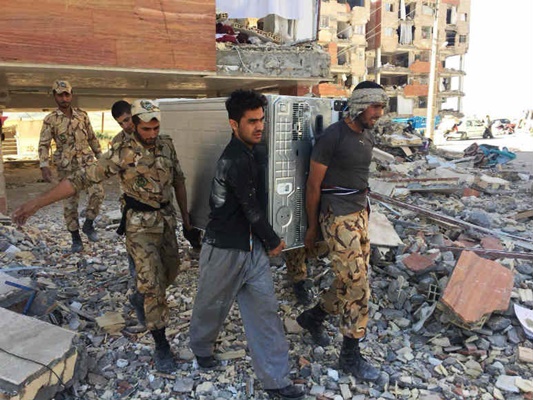 Mawlawi Mohammad Mohammadi, the Friday Prayers leader of Kermanshah, has appreciated the services provided by Iranian army forces in the earthquake-struck regions of the province.

Following the effective presence of the army in the earthquake-stricken areas of Kermanshah province, Mawlawi Mohammadi, the Sunni leader of Friday Prayers of Kermanshah, sent a letter to Army Chief-Commander Major General Abdolrahim Mousavi to appreciate the services of his forces in helping people in Kermanshah province after the deadly quake.

According to a Farsi report by ISNA, in this letter Mawlawi Mohammadi said the nation and the whole world saw the genuine sacrifice of the commanders, officers, and the soldiers of the army which was the manifestation of unity and solidarity.

He further added that the efforts made by high-ranking officials and commanders of the army who did not hesitate a moment must be appreciated.

Back on November 12, a magnitude 7.3 earthquake hit villages and towns in Iran’s western Kermanshah province along the mountainous border with Iraq, killing 530 people and injuring thousands of others.

Criss-crossed by several major fault lines, Iran is one of the most earthquake-prone countries in the world. In 2003, a magnitude 6.6 quake in Kerman province killed 31,000 people and flattened the ancient city of Bam.