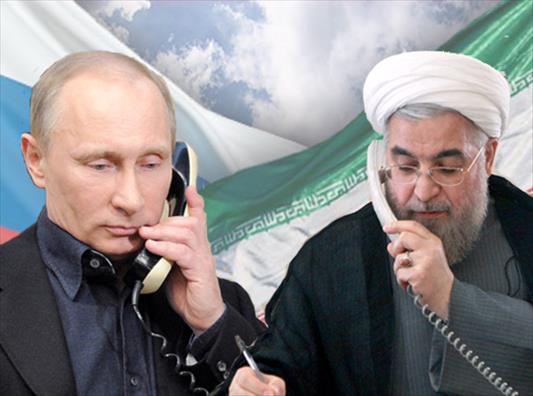 The Iranian president has told his Russian counterpart that the conflict between Armenia and the Azerbaijan Republic over the disputed Nagorno-Karabakh region can be resolved only through dialogue.

Speaking in a Saturday phone conversation with his Russian counterpart Vladimir Putin, President Hassan Rouhani noted Iran is concerned over military clashes between Baku and Yerevan.

“Possible intervention by some third countries in this conflict will lead to the escalation and prolongation of the crisis, and we believe it will not be in the interests of regional countries,” he said.

President Rouhani touched upon his contacts with Armenian and Azeri heads of state.

He also underlined the need to protect the security of Iran’s borders and the lives of Iranian citizens living in border areas.

“Peace in the region is very important to us,” he said.

He also expressed concern over the presence and activities of some terrorist groups in the Nagorno-Karabakh conflict.

“The presence of terrorists could be dangerous for Iran, Russia and the whole region,” he said.

He stressed the need for concerted efforts and collective security in order to put an end to the clashes, the establishment of a ceasefire and the start of talks in order to settle the crisis.

“If clashes continue, the situation in the region will become more complicated and lead to more extensive damage as well as financial and human costs,” he said.

He praised Russia’s mediation of a truce between the warring sides and its efforts to start negotiations between Yerevan and Baku. He described the implementation of the armistice as important, and added Iran will offer any help and cooperation in that regard.

President Rouhani then touched upon the negative effects of the coronavirus pandemic on economic transactions between Tehran and Moscow, calling for the resumption of mutual trade ties, namely the re-establishment of flights and resumption of transit of goods by trucks while observing health protocols.

He also expressed Iran’s willingness to work with Russia in producing a vaccine for coronavirus.

Rouhani then appreciated the Kremlin’s support at international circles for different resolutions as well as its opposition to the imposition of illegal sanctions on the Iranian nation.

President Rouhani expressed hope that consultations and cooperation between the two countries will further expand on different fronts.

In the phone conversation which took more than an hour, the Russian president elaborated on his country’s measures to help settle the Nagorno-Karabakh conflict.

He said Russia understands Tehran’s concerns over this crisis and is keen to cooperate with Tehran to resolve the conflict.

Putin said war should stop in the first place, adding Moscow has reached agreement with Armenia and the Azerbaijan Republic on the enforcement of a ceasefire as of October 10, 2020.

He expressed hope with the establishment of the truce, ground will be prepared for negotiations.

Putin described as dangerous the intervention of third countries as well as some terrorist groups in the Karabakh-Nagorno conflict.

Putin noted that all neighbours should seek to put an end to war and bloodshed and push for a negotiated settlement of the crisis.

Elsewhere in his remarks, Putin reiterated that the Kremlin’s stances on the Iran nuclear deal as well as the illegal sanctions on Iran are clear and transparent.

He noted Moscow has always been against illegal moves against Iran.

He also expressed hope that the level of Tehran-Moscow economic and trade ties will rise again with the containment of the coronavirus pandemic.