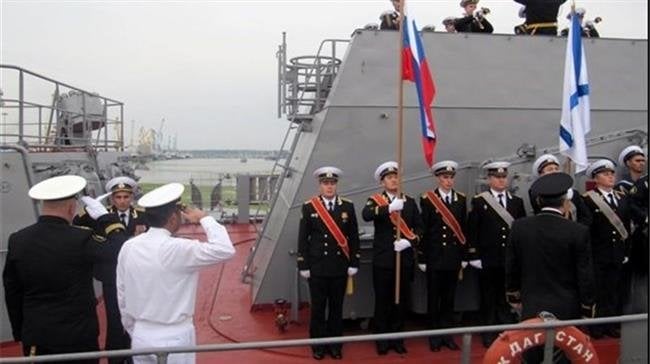 The Iranian navy's commander announced Iran and Russia will hold joint military drills in the Caspian Sea in the near future, stressing the two countries' opposition to military presence of external powers in the region.

“Relief and rescue, tactical, and anti-piracy exercises between Iranian and Russian naval forces are being planned and will be carried out in the near future,” Rear-Admiral Hossein Khanzadi said on Sunday.

“Joint drills with Russia will surely take us to a new level of cooperation in strategic, tactical, and operational areas at sea,” he added.

Iran and Russia have held several naval drills in the Caspian Sea. Khanzadi said cooperation among the naval forces of the Caspian states has “tremendously deepened” in recent years.

According to the commander, relations have now assumed a traditional format, where regional states enjoy good mutual understanding.

Khanzadi asserted that the presence of foreign forces in the waters is ruled out and will certainly be confronted. “The Caspian is the sea of peace and friendship, and all its littoral countries follow this approach.”

Last time the Iranian and Russian navies held joint drills in the world’s largest enclosed inland body of water was in July 2017.

A Russian naval fleet berthed in Iran’s Bandar Anzali for the purpose, becoming the fifth Russian flotilla to make the port call in 10 years.

In March 2018, a flotilla of Iranian warships, comprising the domestically-manufactured destroyer Damavand and the missile-launching frigate Derafsh, sailed to the Russian port of Makhachkala.

The Iranian navy has celebrated significant advances over the past years and expanded its global operating range.

On December 1, the country inaugurated Sahand, its most advanced-yet military vessel with radar-evasion properties and the capability to take on long-term voyages without resupply.

On Friday, the navy said it is to dispatch a flotilla, including Sahand, to the Atlantic Ocean on a five-month mission.

The fleet will depart for the waters early next year on the Iranian calendar, which begins on March 21, Rear-Admiral Touraj Hassani-Moqaddam, the navy’s deputy commander told IRNA.