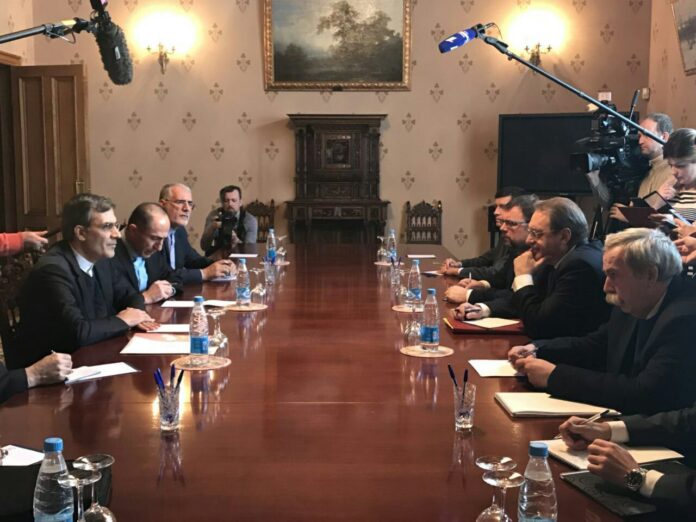 In the Friday meeting, which was held at the Russian Foreign Ministry building and lasted three hours, the two sides discussed the latest developments in Yemen, Iraq, Libya, Palestine, and also the Syrian National Dialogue Congress.

At the beginning of the meeting, Bogdanov told reporters, “The situation in the Middle East and North Africa region is developing dynamically. Complex processes are unfolding in the area; sometimes they are very controversial.”

Therefore, he added, it is very interesting and important for Russia to exchange views, considerations and predictions with its Iranian partners and friends.

Touching upon the significance of the Syrian National Dialogue Congress, the senior Russian diplomat added, “The presidents, foreign ministers and their deputies next to other officials of the two countries, maintain very close contacts and coordination and it reflects the strong ties between the two countries.”

In turn, Jaberi Ansari said at the beginning of the meeting that the high level of Tehran-Moscow relations and cooperation, as well as the speed and depth of the developments in the region and the world, have made diplomatic talks and consultations of the two countries a necessity at short intervals.

The senior assistant to Iran’s foreign minister further emphasized, “Today, we would discuss the whole regional developments, particularly those in Iraq, Libya, Palestine, Syria and Yemen.”

Jaberi Ansari also referred to the war and siege on Yemen and the massacre of the Yemeni people in such situation and called for a serious dialogue to help end the cruel war against Yemenis.

“The occupation of Palestine and the Jerusalem al-Quds crisis, which has lasted for decades and has escalated with the recent moves of the United States and the Israeli regime, is another important issue that will be raised in our talks today,” noted Jaberi Ansari.

The Iranian top diplomat also pointed out that the issue of Syria also constitutes an important part of consultations, saying that tomorrow these talks would continue at the Sochi tripartite Summit with Russian and Turkish partners who are part of Asatana Talks as well.