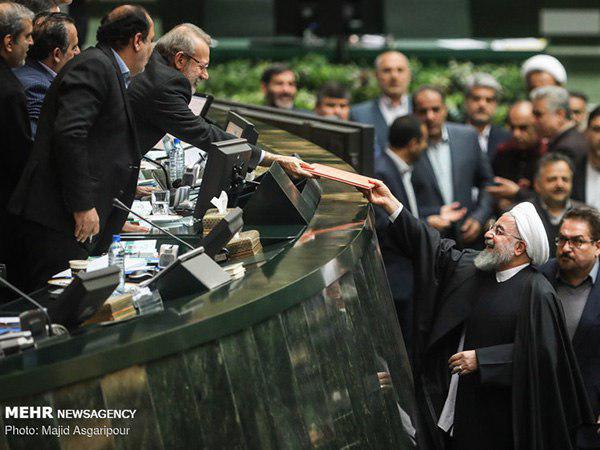 Iran’s President Hassan Rouhani has appeared before lawmakers on Tuesday to submit an annual budget of $47.5 billion for the next Iranian calendar year (to start on March 21).

Addressing the lawmakers, Rouhani said the government’s heavy dependence on oil revenues has made the country vulnerable to economic sanctions, hence the country needs urgent moves to diversify its income sources.

“If the budget’s burden was not on oil, the impact of the sanctions could have been less. The unhealthiness of the country’s economy and economic structures and budget and banks is an important issue,” he said.

Rouhani said the country needs to move to modify the workings of the banks more than ever, as it is key to improving the Iranian economy, IRNA reported.

The budget for some activities has been reduced dramatically, compared to the last year’s budget. Notably, the proposal has cut Iran’s defence budget to half.

According to Iranian parliament’s law, the lawmakers have 10 days to evaluate the proposed budget and submit recommendations to the parliament’s budget commission.

The commission then should prepare a report on the proposal and submit it to the parliament within 15 days.