Iranian Papers Back on Newsstands after Nowruz Holidays

IFP has taken a look at the front pages of Iranian newspapers on Saturday, April 6, 2019, and picked headlines from 15 of them. IFP has simply translated the headlines and does not vouch for their accuracy.

Iranian papers were back on newsstands on Saturday, April 6, after over two weeks of Nowruz holidays, marking the beginning of the New Persian Year.

The top story in all papers was the devastating floods that hit various Iranian cities and provinces, especially Golestan, Lorestan, and Khuzestan provinces as well as the city of Shiraz, which claimed dozens of lives and displaced thousands.

2- S. Korea Seeks to Replace Iran’s Oil with US’ ahead of Exemption Deadline 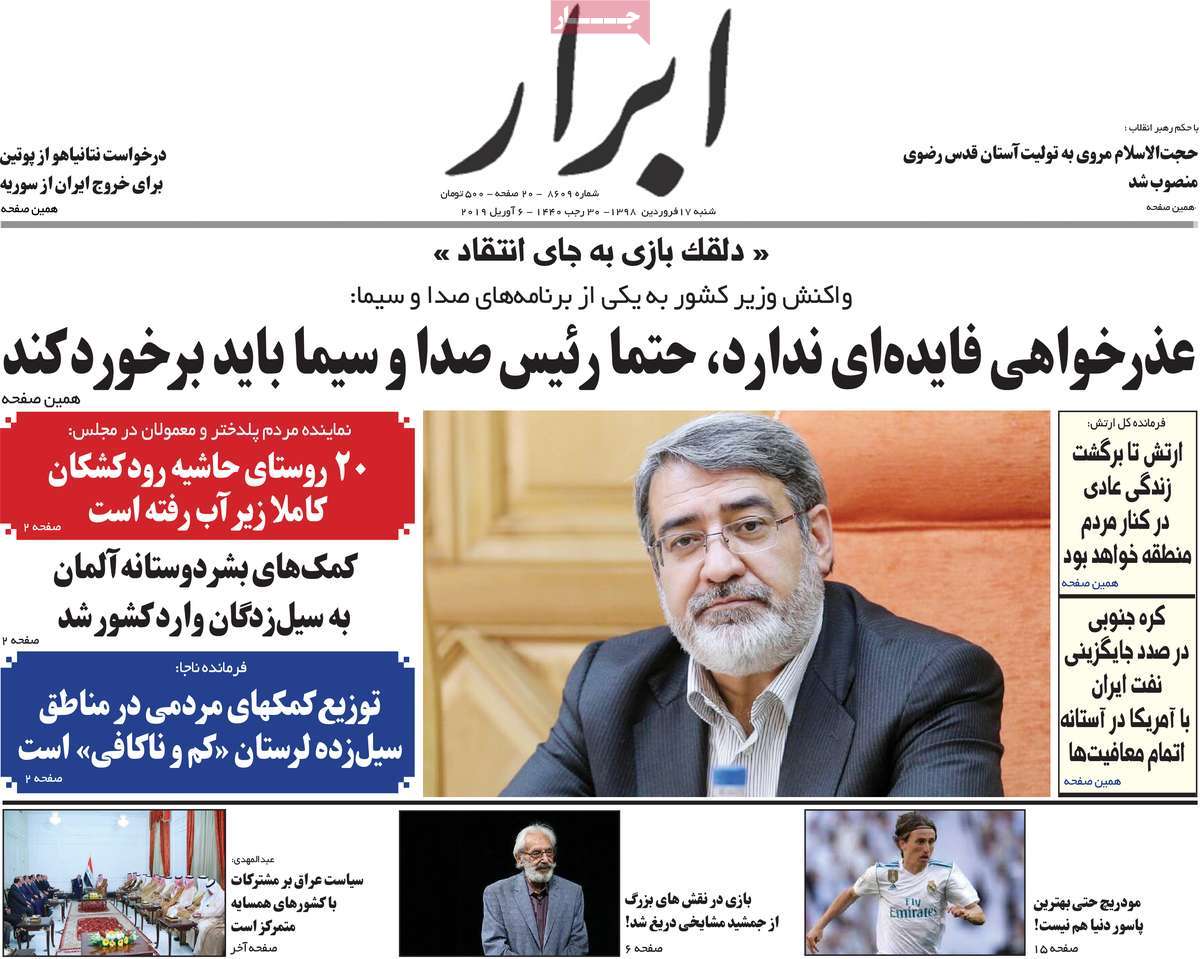 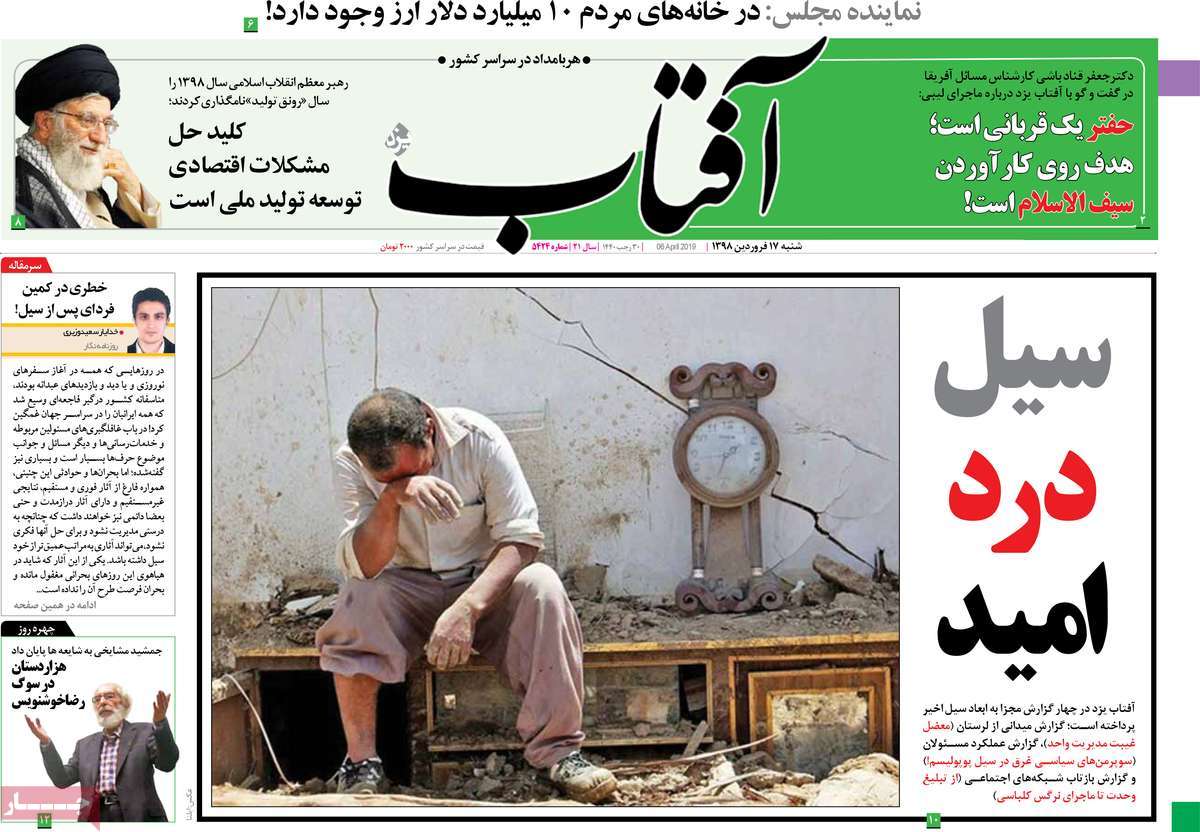 1- Iran Leader: New Year to Be Year of Opportunities, Opening for Iranians 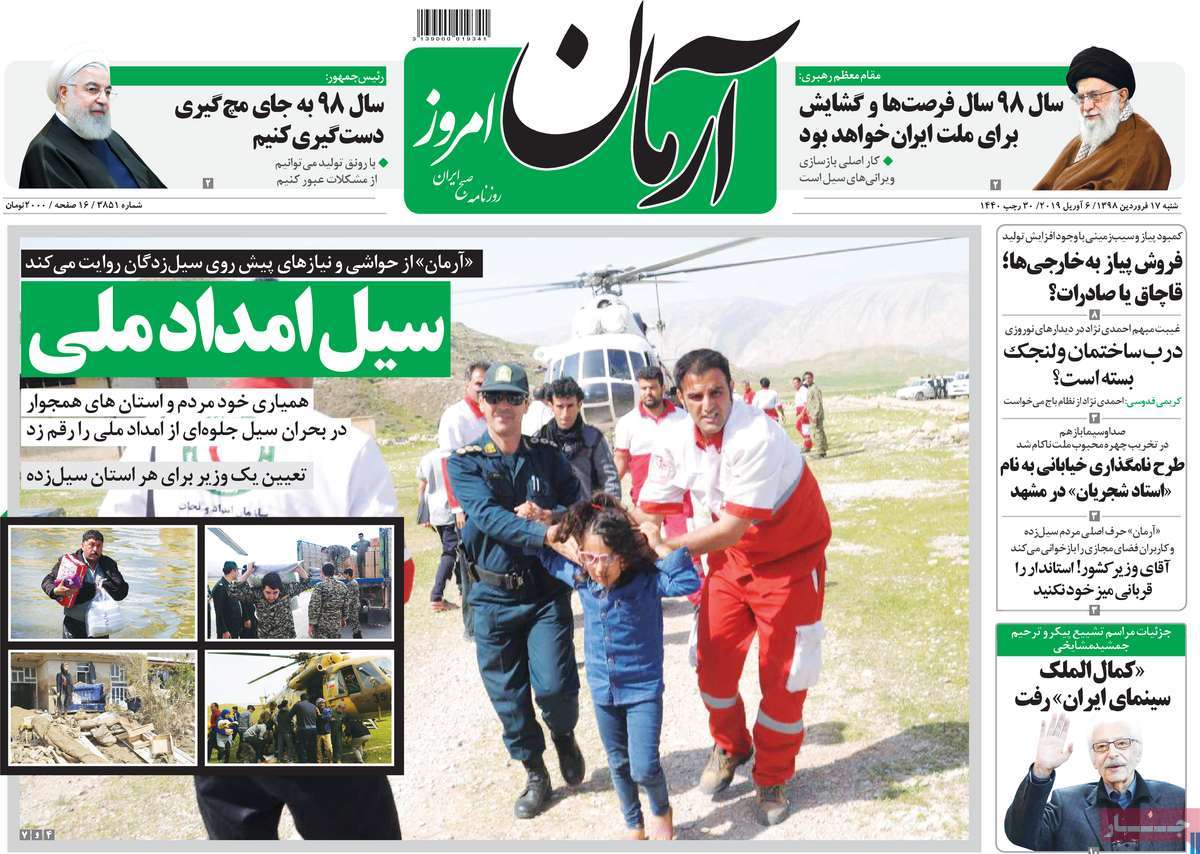 * Zarif: Iran to Pressure Europe on Fulfilling Their JCPOA Commitments

2- Flood Makes Nowruz a Tragedy for Many Iranians 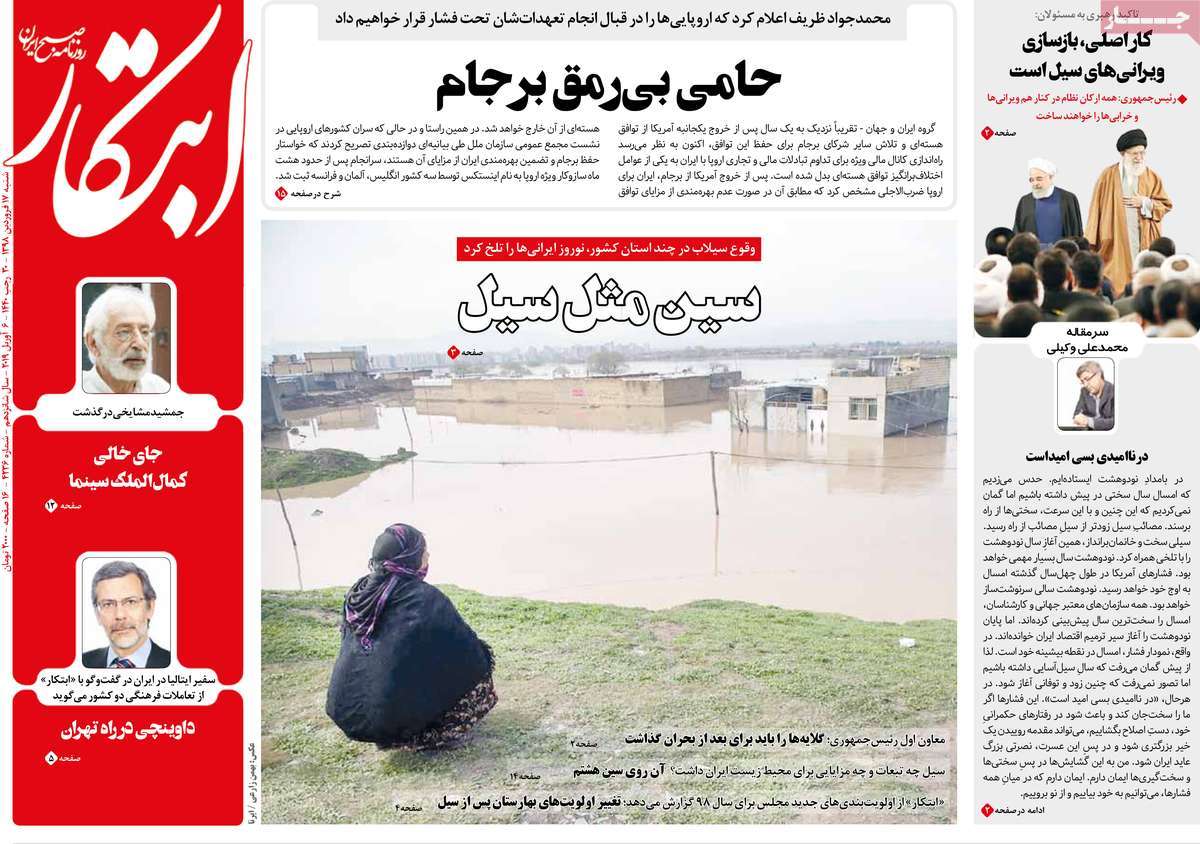 1- Life Is Ahead: People Rush to Help Compatriots as New Year Begins with Flood

2- Iran Leader: Quds Will Never Be Occupying Aggressors’ Capital, Neither Will Golan Be Separated from Syria

* Zarif: This Is Economic Terrorism

4- Unprecedented Flood and Our Responsibility [Editorial] 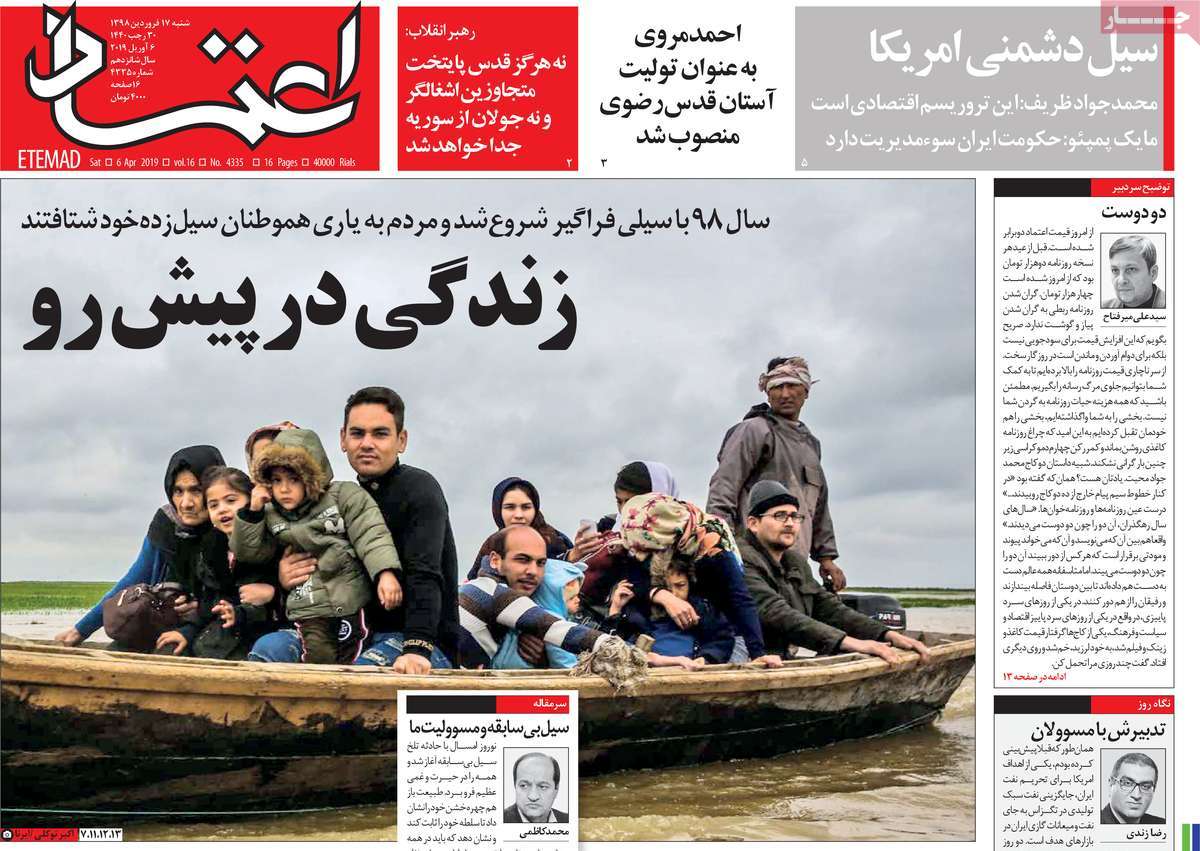 3- Iran Leader: Tomorrow of Iran to Be Much Better than Today 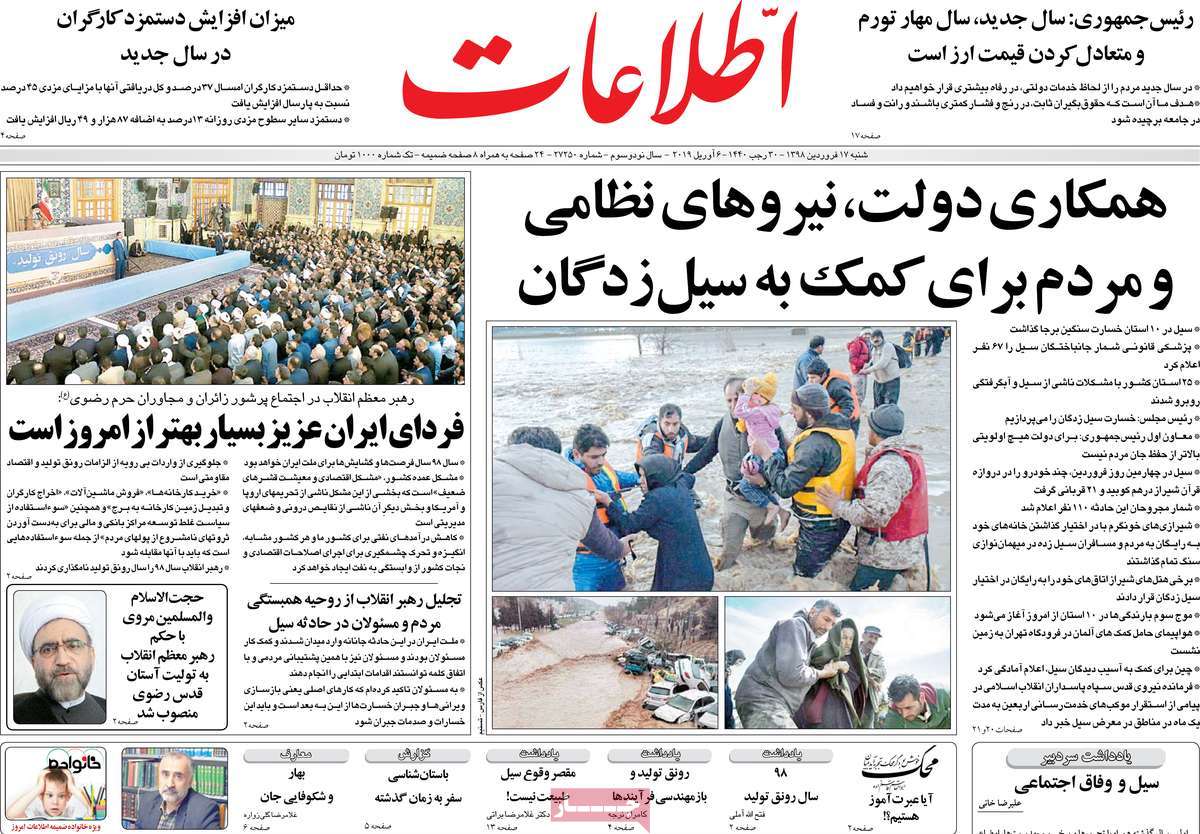 2- Flood from Lorestan to Golestan: Divine Mercy or Disaster? 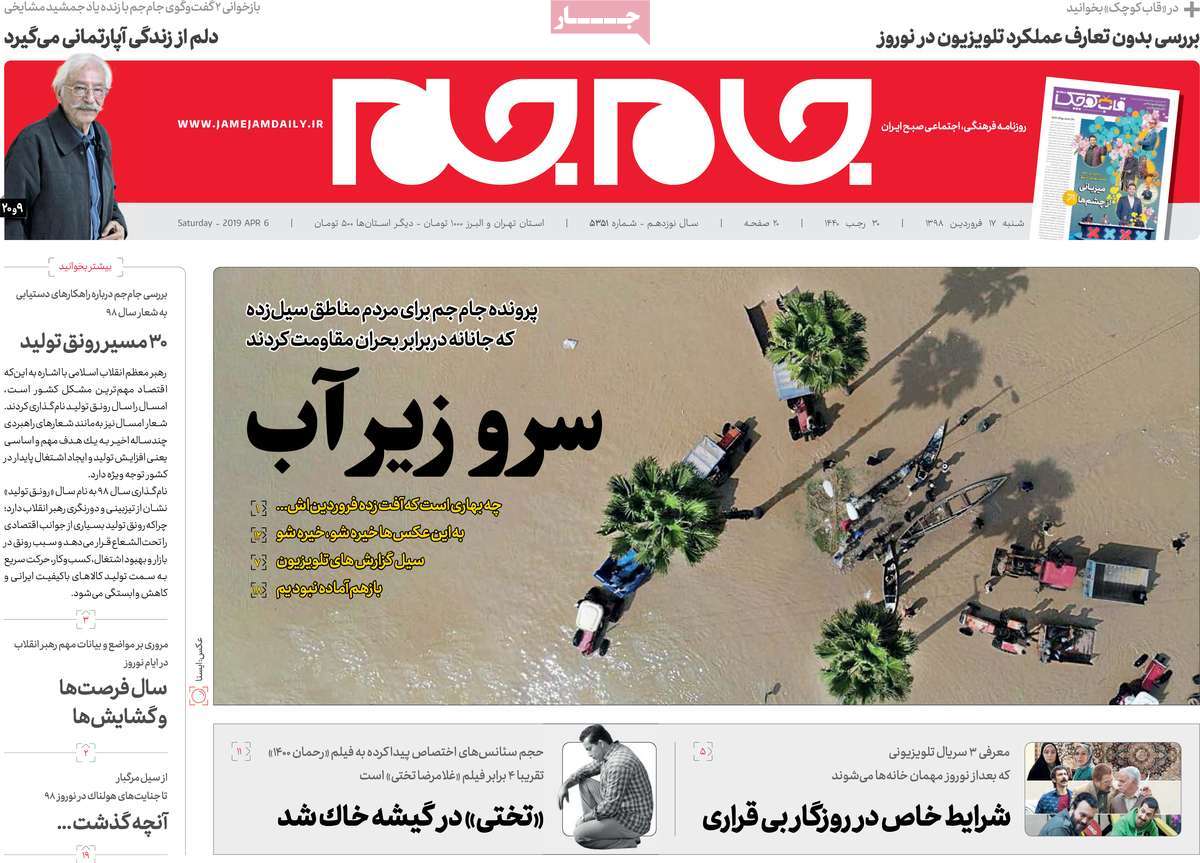 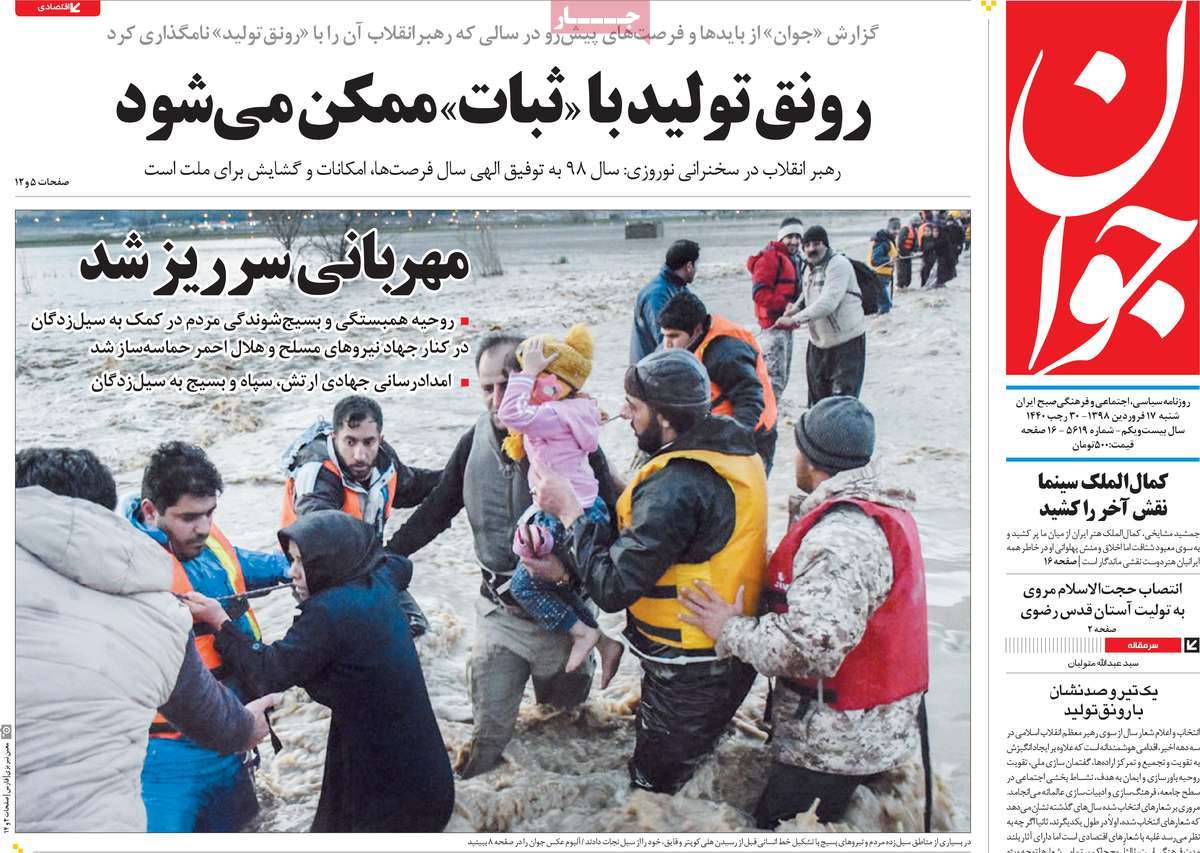 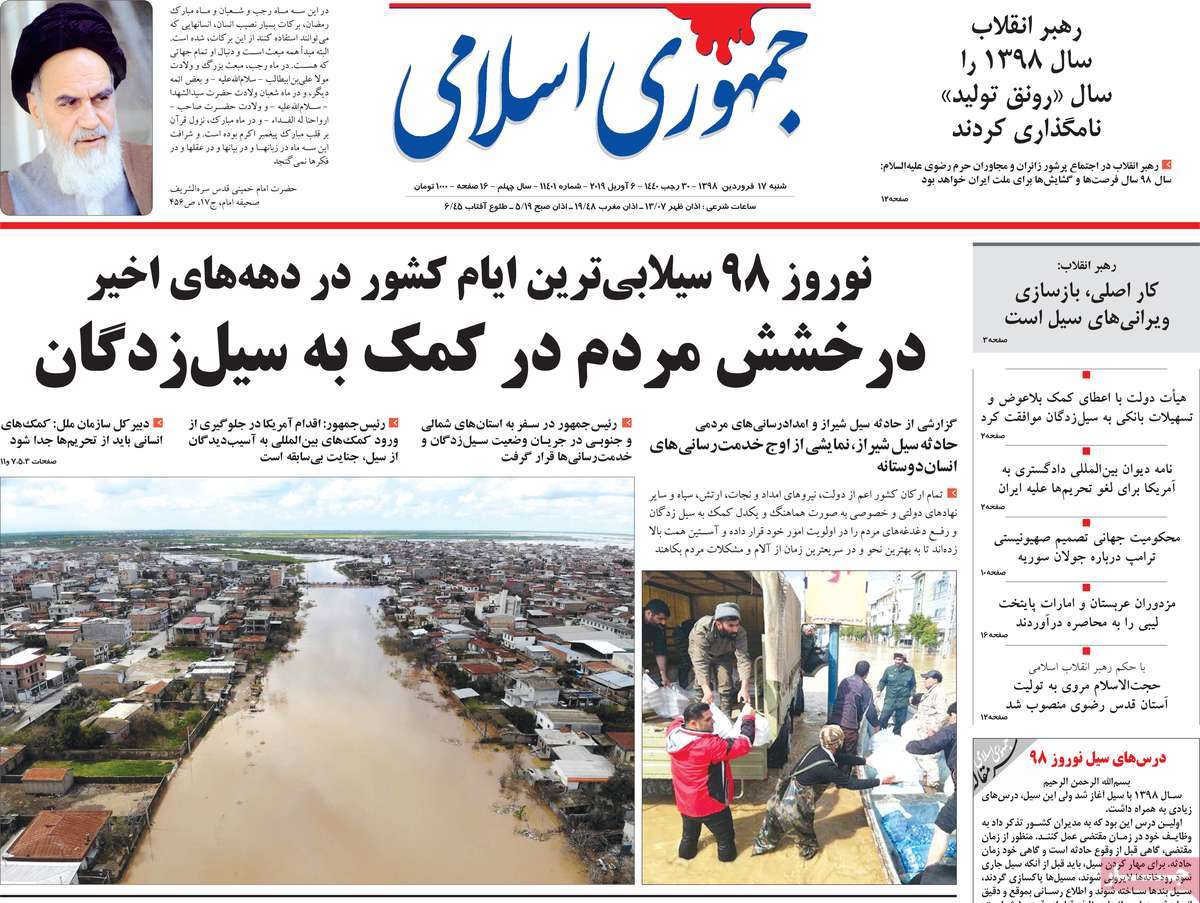 1- Iran Leader: 1398 to Be Year of Opportunities, Openings

3- Damages Must Be Compensated: Ayatollah Khamenei 1- Iran’s Solidarity against Slap of Flood 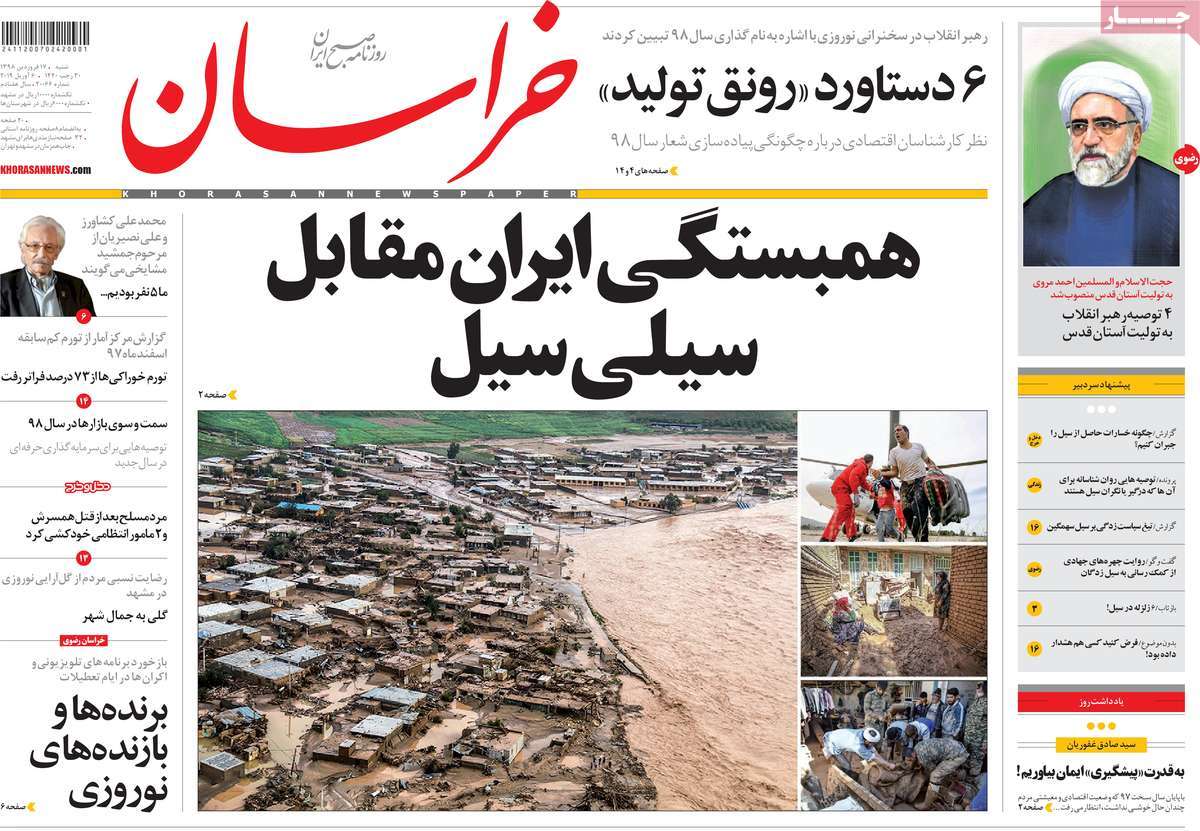 2- Flood and Civil Society: An Analysis on Social Reactions to Flood 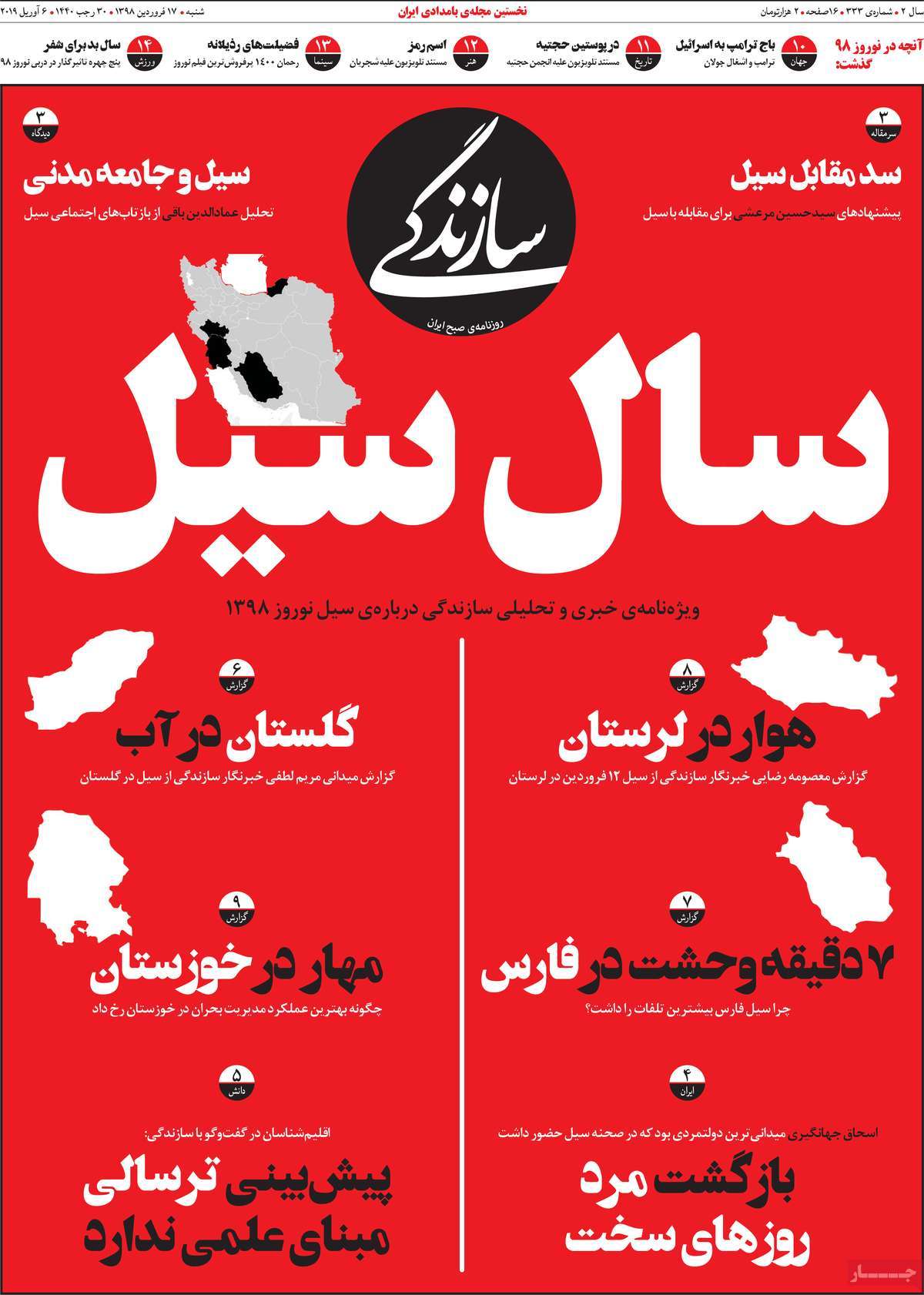 1- New Account of Why Iran Needs to Approve FATF Bills

2- Larijani: If FATF Bills Were against National Interests, Why Were They Approved in 2007? 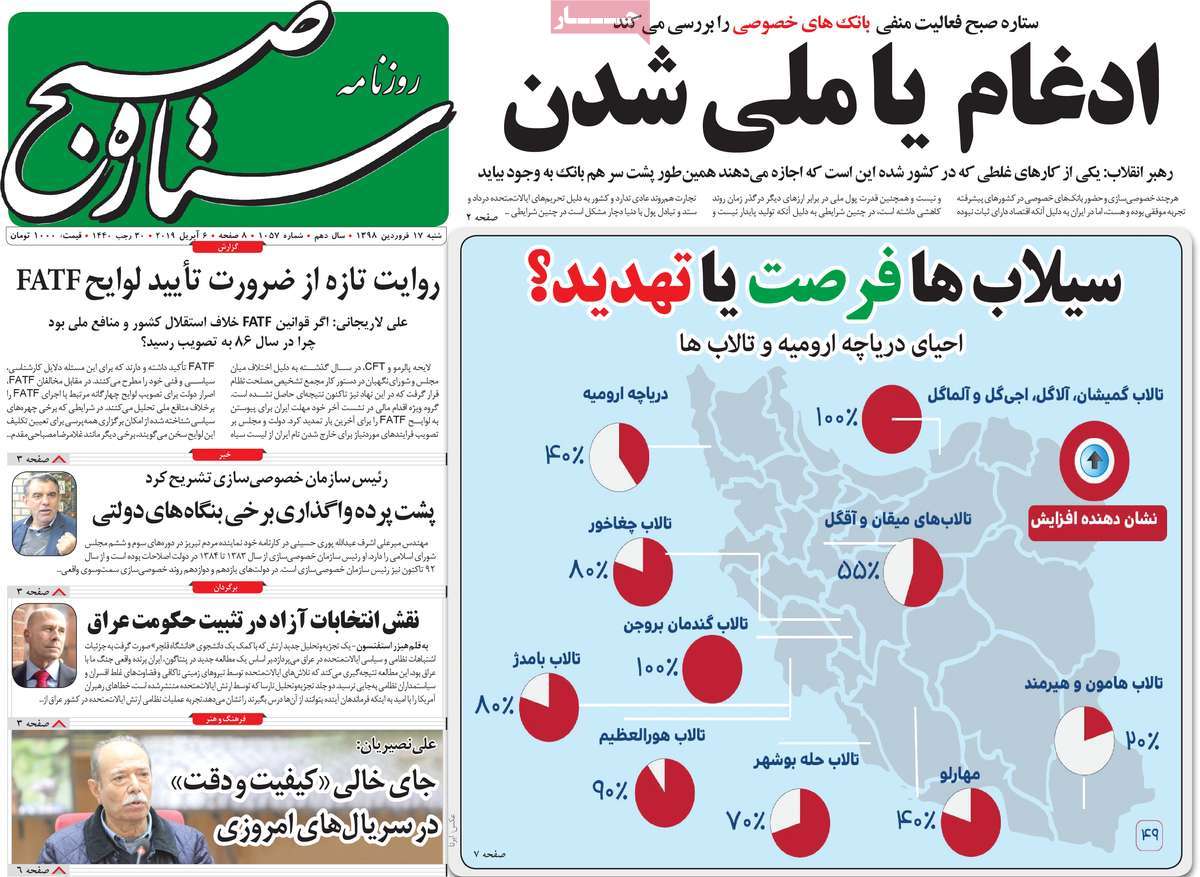 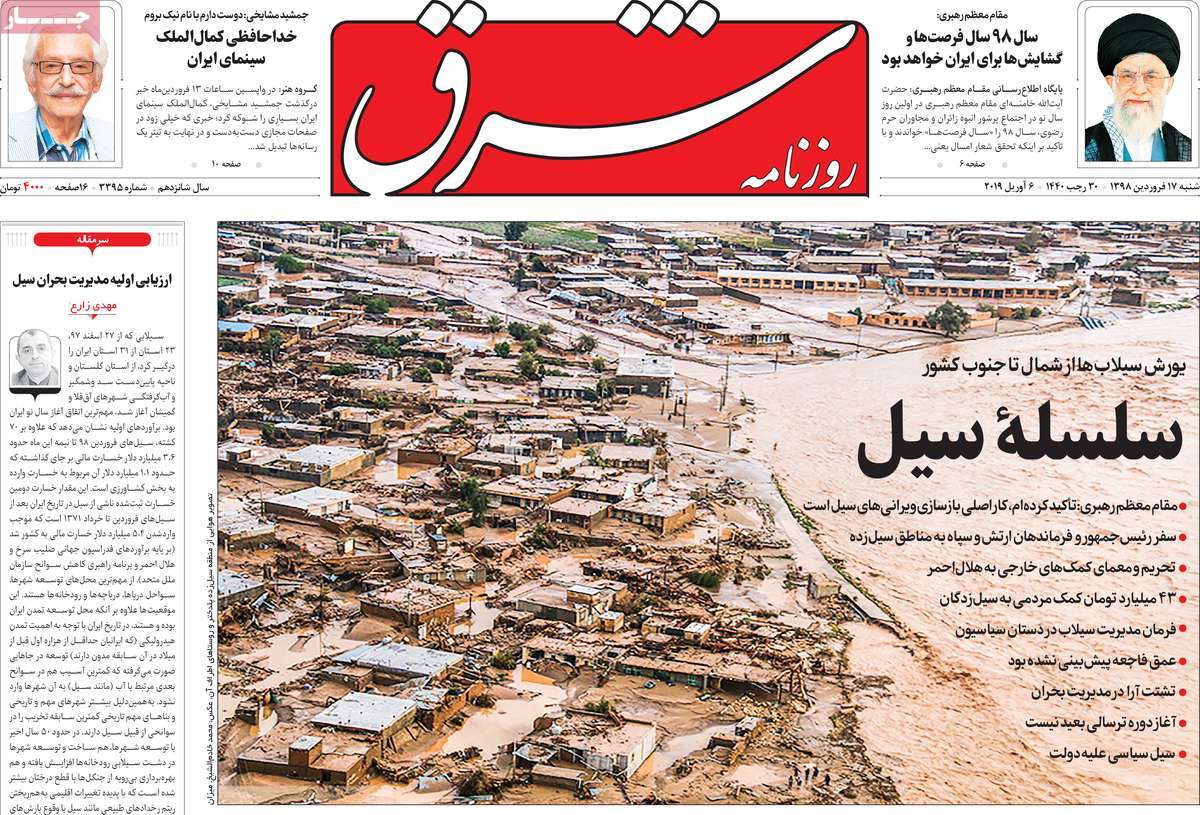