A look at Iranian newspaper front pages on Oct. 20

IFP has scanned the front pages of Iranian newspapers released on October 20 and has picked items from 26 of them.

A ceremony to celebrate the National Exports Day in Iran, attended by the first vice-president, and comments by senior nuclear negotiator Seyyed Abbas Araghchi that the parties involved in the talks are determined to finalize a deal by November 24 made headlines in several newspapers on Monday. The stellar performance of Iranian athletes and the colorful medals they pulled off on day one of the 2014 Asian Para Gamesin Incheon, South Korea were also in the news.

Abrar: “The heart-wrenching scar of acid on the face of Nesf-e Jahan (Half of the World),” wrote the daily in reference to recent acid attacks in the historical city of Isfahan.

Abrar: Iran’s parliament has adopted a bill which says the responsibility to take practical measures to promote virtue and prevent vice only lies with the Government.

Abrar: “My trip to Iran aims to unite regional and global efforts to take on the Islamic State of Iraq and the Levant (ISIL),” said Iraqi Prime Minister Haider al-Abadi. 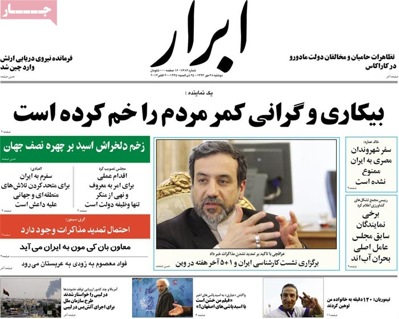 Afarinesh: “A mass grave containing the bodies of Iranian pilgrims has been discovered in southern Baghdad.” The Iranian nationals who were in Iraq to visit holy sites were killed by ISIL militants.

Afarinesh: Turkish President Recep Tayyip Erdogan has said that those who support Kobani are by no means different from Kurdistan’s People Party (PKK) militants. 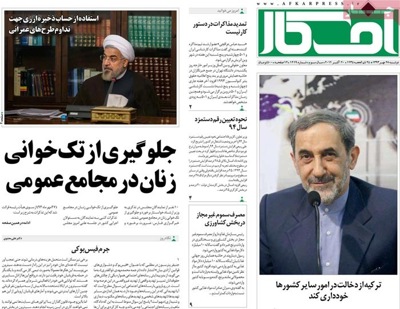 Aftab-e Yazd: “Economists have objected to a request by Iran’s Principlist MPs to [authorize the government] to pry into people’s bank accounts.

Aftab-e Yazd: “Neda is after bolstering the Reformist movement,” said Saeed Nour-Mohammadi, a member of the Executive Committee of soon-to-be-launched Nedaye Iranian (Call of the Iranians) Party, which is led by Sadegh Kharrazi, a former Iranian ambassador to France. 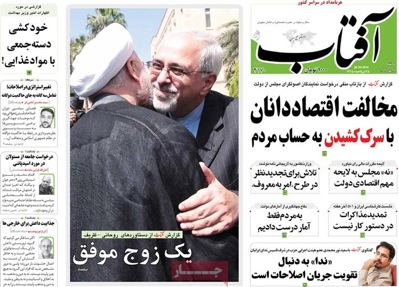 Arman-e Emrooz: “The defense lawyer of Mehdi Hashemi, the son of the chairman of the Expediency Council, has lodged a complaint against some MPs,” reported the daily. According to the lawyer, a number of Iranian deputies have written an open letter asking for an open trial of his client, but he cited distortion of his remarks in the letter as the reason behind his complaint.

Arman-e Emrooz: “Tailwind blows in the sail of nuclear talks,” is the daily’s pick on its front page, reporting that the three-way meeting between Iran’s Mohammad-Javad Zarif, EU’s Catherine Ashton and US Secretary of State John Kerry will be held sooner than agreed on.

Arman-e Emrooz: “Everlasting historic letters,” is the banner headline of the daily, explaining that Ali Motahari, a Tehran MP, and Sadegh Zibakalam, a university professor, are top on the list of those who show reaction in their letters to what plays out in Iranian society.

Arman-e Emrooz: The Communications Regulations Commission has said the companies that seek to launch Internet TV should be based in Iran and secure permissions from the ministries of Communications and Information Technology, Culture and Islamic Guidance as well as IRIB before starting their online broadcast. 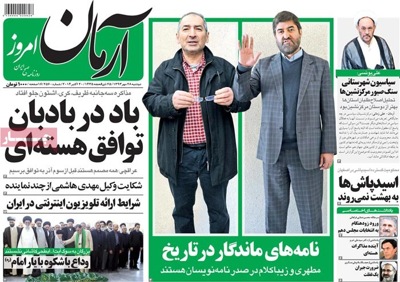 Asia: “Jan Eliasson, the deputy UN secretary general, is due in Tehran in late October.” 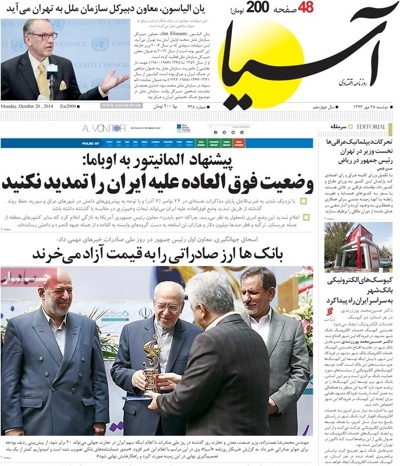 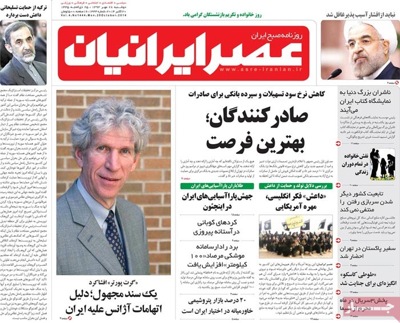 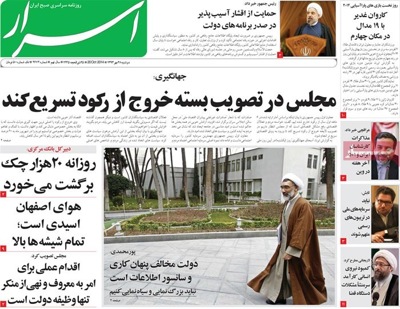 Ebtekar: “In quest of a successor to Ezatollah Zarghami,” writes the daily on its front page about speculations on who will succeed the incumbent president of Islamic Republic of Iran Broadcasting, Iran’s national broadcaster.

Ebtekar: “A first session of the Supreme Welfare and Social Security Council is held in eight years.”

Ebtekar: “The average worker’s wage for the next Iranian calendar year (starting March 2015) will increase in keeping with the hike in inflation,” said the minister of labor and social affairs. 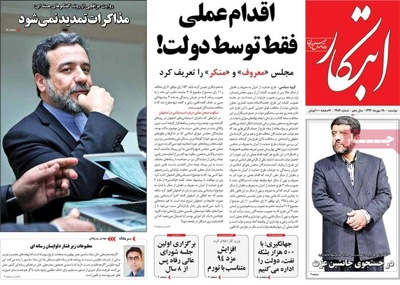 Eghtesad-e Pooya: President Rouhani has said the government would tap into the Foreign Exchange Reserve Fund to carry out more development plans in the country. Emtiaz: “Breast Cancer is on the rise in Iran.” Etemad: The Reformist Consultative Council has decided to launch electoral committees [15 months ahead of parliamentary elections] to be headed by the ministers who served in former President Mohammad Khatami’s Cabinet.

Etemad: “A recent series of acid attacks [on women in Isfahan] have met with public resentment in society.” Ettela’at: “An expert meeting between Iran and P5+1 will be held in Vienna on October 22,” said Iran’s Deputy Foreign Minister Seyyed Abbas Araghchi.

Ettela’at: “Iran’s health minister warns of the side effects of unauthorized pesticides used in the agriculture sector.” 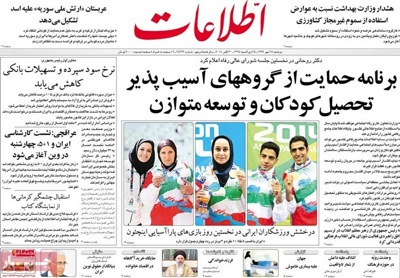 Hamshahri: “The sixth seasonal Flowers and Plants Exhibition opens in the capital on Monday October 20.” 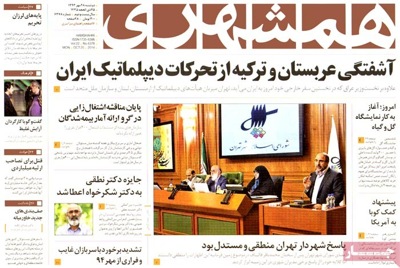 Hemayat: “A lack of efficient human resources is to blame for the problems the Judiciary is grappling with,” said Judiciary Chief Ayatollah Sadegh Amoli Larijani. 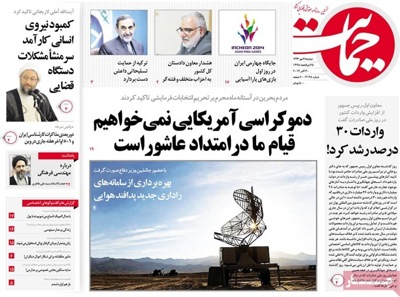 Iran: “Iran’s capital has set a new record in terms of having healthy air,” said the daily, explaining that the number of days Tehran residents have breathed clean and healthy air in an almost seven-month period this year (March to October 2014) stands at 132 days. 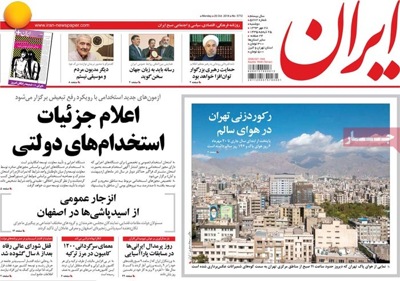 Iran News: Tehran is to host an international conference on ‘A World Free of Violence and Extremism’, reports the English-language daily. 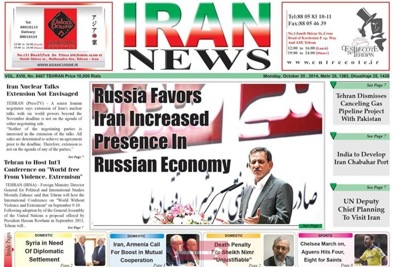 Javan picked “The state lobby for familiar private hands,” as its banner headline to quote Ahmad Tavakkoli, a Tehran MP, as saying that Minister of Industry, Mines and Trade Mohammad Reza Nematzadeh has a seat on the board of directors of 20 petrochemical companies. Jomhouri Islami: “All parties to the nuclear talks are determined to arrive at a final deal ahead of the target date [November 24],” said Iran’s nuclear negotiator Seyyed Abbas Araghchi. 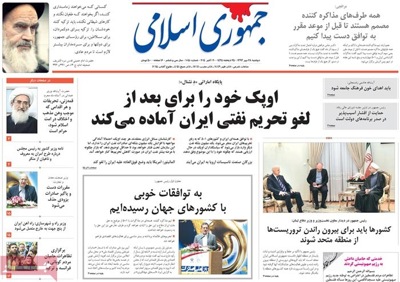 Kaenat:“The biggest cyber prostitution ring in Iran has been busted.” 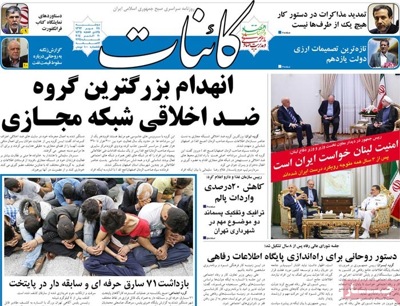 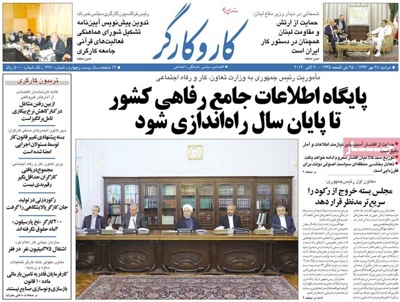 Payam-e Zaman: “Iran has posted a 20 percent surge in goods exports in the March-September period this year,” reported the daily, citing officials speaking at a ceremony to mark Iran’s National Exports Day. 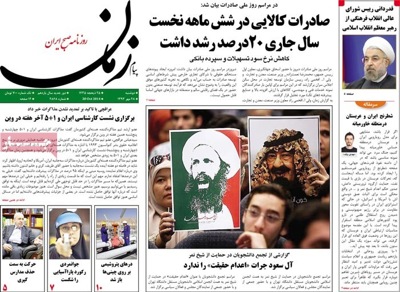 Rah-e Mardom reported that Parliament has asked the Judiciary to identify the perpetrator(s) of a recent spate of acid attacks [on women].” 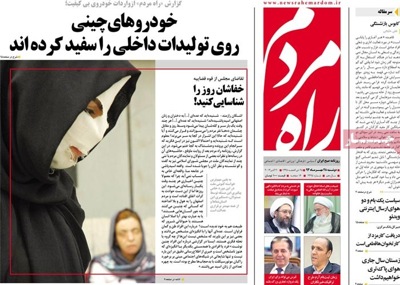 Sharq: “Al-Baghdadi is an apostate,” said Al-Qaeda leader Ayman al-Zawahiri in a reference to Abu Bakr al-Baghdadi, the self-proclaimed caliph of the so-called “Islamic State”.

Sharq:“The bill to support those who engage in promotion of virtue runs counter to the provisions of the Constitution,” the interior minister said in a letter to the parliament speaker. 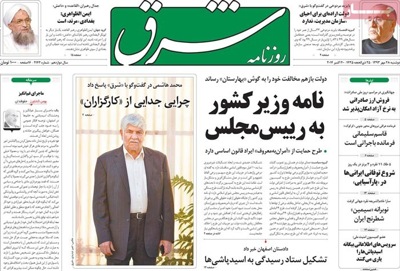 Tafahom: The deputy head of the Environment Caucus in Iran’s parliament has welcomed a motion on imposing a seven-year ban on hunting in the country. 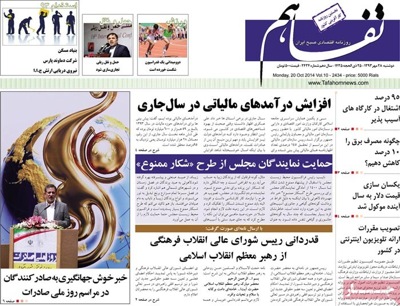 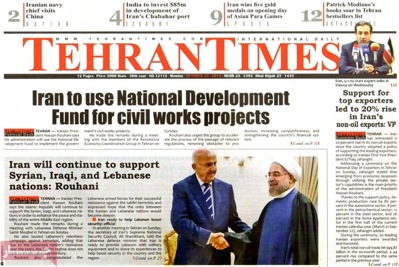