A look at Iranian newspaper front pages on Nov. 19

Failure by the Islamic Consultative Assembly on Tuesday to confirm President Rouhani’s fourth nominee for the Ministry of Science, Research and Technology Fakhreddin Ahmadi Danesh-Ashtiani dominated the front-page headlines of most Iranian newspapers on Wednesday. A final round of nuclear talks between Iran and P5+1 in Vienna only days before the November 24 deadline was also given a lot of front-page attention in Iranian dailies. Also in the news were remarks by President Rouhani on his Cabinet’s determination to press ahead with the Health Transformation Plan and the victory the Iranian national soccer team pulled out in a friendly against South Korea in Tehran, Iran’s third win in a row.

Abrar: “The Islamic State of Iraq and the Levant [ISIL] is very close to meeting its end,” said the Iraqi prime minister. 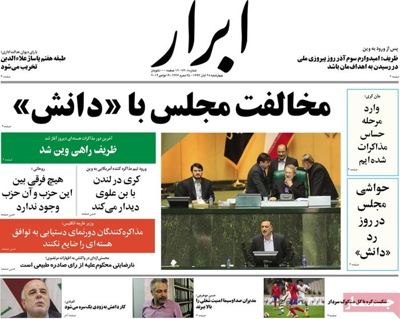 Asr-e Rasaneh: Iran has landed on the list of the world’s top 50 tourist destinations. 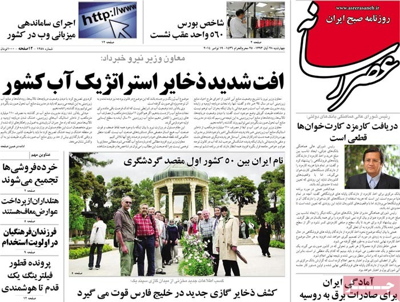 Asrar: “A decree by the Supreme Leader will allow the acting science minister to be reinstated,” said Abbas Ali Kadkhodaei, the spokesman for the Guardian Council.

Asrar: “Female musicians can perform at concerts,” said the spokesman of the Ministry of Culture and Islamic Guidance. 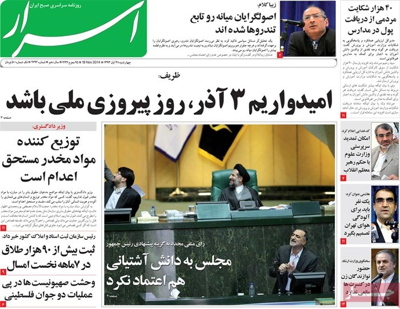 Ebtekar: Commander of the Islamic Revolution Guard Corps Major General Mohammad Ali Jafari has said that if the nuclear talks result in a final deal, everyone will see that we have not given up [our rights]. 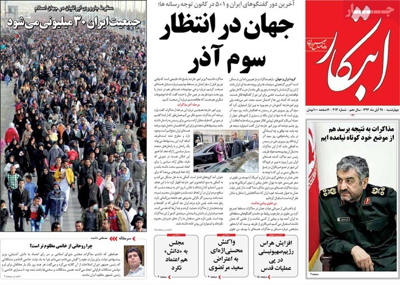 Eghtesad-e Pooya: Airplanes from 70 countries use Iran’s airspace to fly to their destinations. 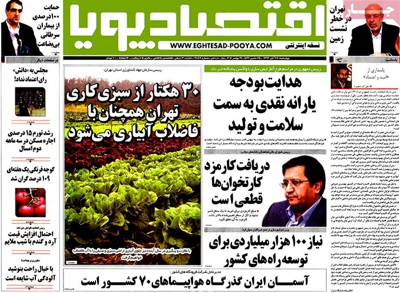 Emtiaz: “Iran defeat South Korea 1-0 in a not-so-friendly friendly match,” read the paper’s front-page headline, in reference to verbal disputes on the pitch. 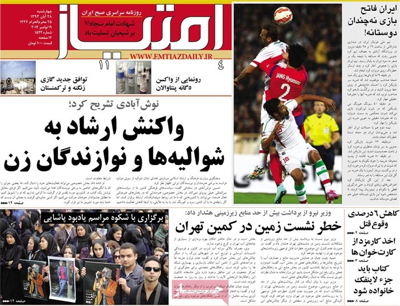 Ettela’at: “The government will pursue the Health Transformation Plan until it produces the intended objectives,” said President Hassan Rouhani. 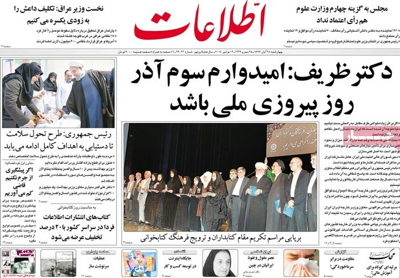 Farhikhtegan: “The president is entitled to naming an acting [science] minister for another three months,” said Bahman Keshavarz, a prominent defense lawyer. 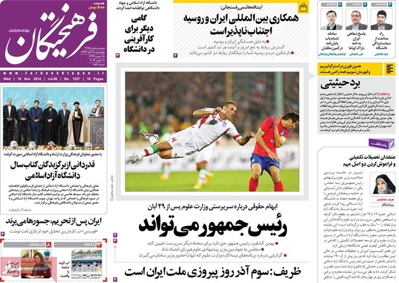 Hadaf va Eghtesad: “The government will have to draft next year’s budget based on oil prices of $70 per barrel, with rial [Iranian currency] trading at around 30,000 to the greenback,” said Chairman of Tehran’s Chamber of Commerce, Industries, Mines and Agriculture (TCCIMA) Yahya Al-e Eshagh. 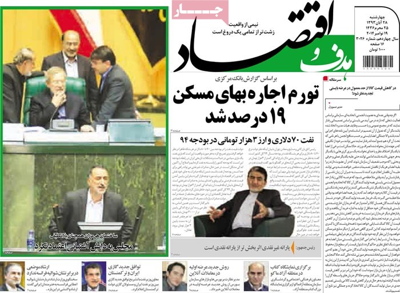 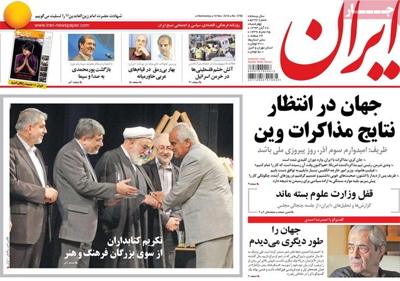 Javan: The monthly cash handouts [Iranian households are given under the Targeted Subsidies Act] will be replaced with energy cards next year [starting March 21, 2015]. 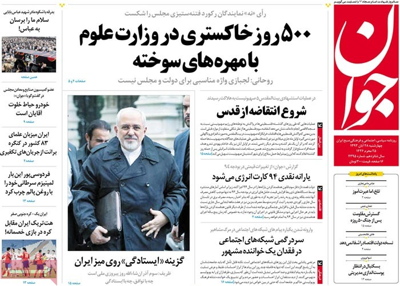 Jomhouri Islami: A state of emergency has been declared in the US state of Missouri with the National Guard on alert. 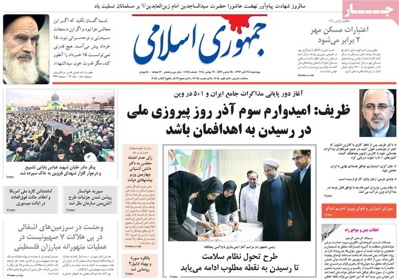 Kaenat: “Charging fees for debit card readers is sure to happen,” said the president of the Supreme Council on State-run Banks. 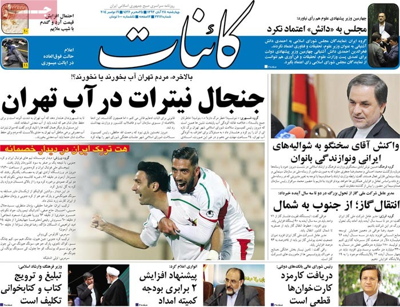 Kayhan: “Nuclear talks would be inconclusive and invalid if all sanctions are not lifted,” said Secretary of Iran’s Supreme National Security Council Ali Shamkhani. 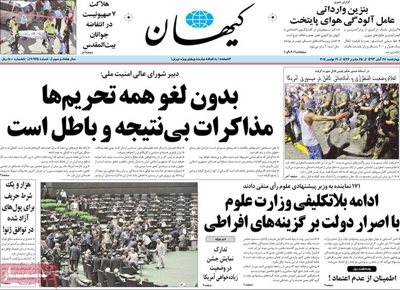 Mardomsalari reports that Iran’s water resources are depleting, adding that the country’s water deposits will be revived next year [starting March 2015]. 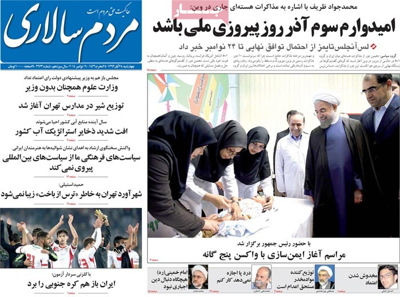 Resalat: “If the other party does not insist on its excessive demands, we will arrive at a [final nuclear] deal,” said Iran’s Foreign Minister Mohammad Javad Zarif. 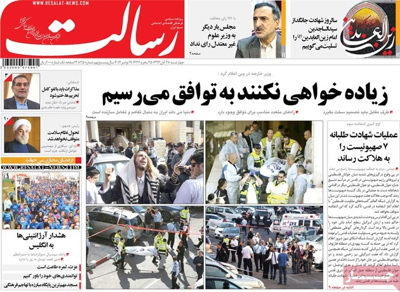 Shahrvand: “Tehran’s water is not contaminated. People [in the capital] should not be concerned,” said a deputy health minister. His remarks come after the head of the Health and Environment Commission of Tehran’s City Council said that tap water in the capital is not suitable for drinking.

Shahrvand: Iran has unveiled its first locally-produced Pentavalent vaccine in a ceremony with President Hassan Rouhani and Health Minister Seyyed Hassan Hashemi in attendance. The vaccine protects children against Haemophilus Influenza type B (the bacteria that causes meningitis, pneumonia and otitis), Whooping Cough, Tetanus, Hepatitis B and Diphtheria. [A Pentavalent vaccine is five individual vaccines conjugated in one intended to actively protect infants from these potentially deadly diseases.] 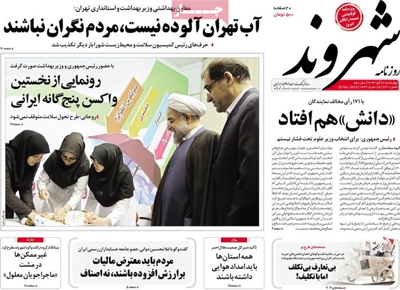