A look at Iranian newspaper front pages on Oct. 14

IFP has taken a look at the front pages of Iranian dailies on Tuesday and picked headlines from 21 of them.

What the majority of Iranian dailies picked as their top story was the warning of the Supreme Leader about Western plots to drive a wedge between Sunni and Shia Muslims. The comments of the government spokesman about inflation and efforts to create jobs drew a lot of attention too. The first gathering of the National Trust Party and the imminent resumption of nuclear talks were also under the spotlight of Iranian dailies.

Abrar: “If satellite-signal-jamming equipment turns out to be harmful, no one has the right to use it,” said a member of Parliament’s Cultural Committee. 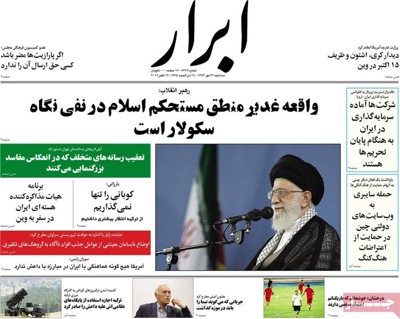 Abrar-e Eghtesadi: “Inflation will slip into single-digit in 2016,” said the governor of the Central Bank of Iran. 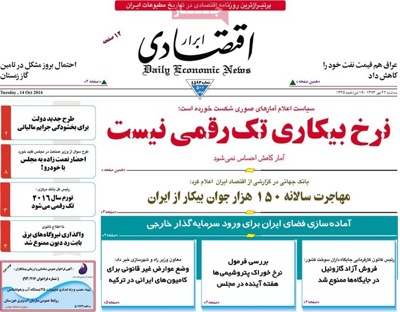 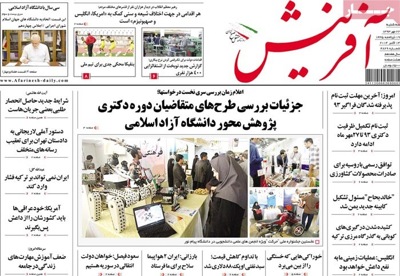 Afkar: “Iran will support the countries which take on ISIL,” said the head of the Center for Strategic Research at the State Expediency Council. 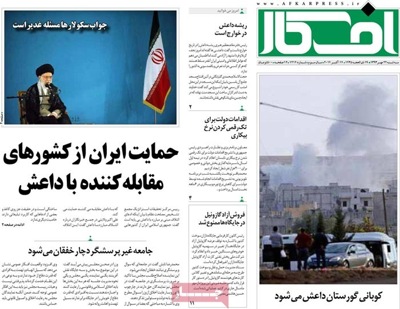 Aftab-e Yazd: “Cash aid given out to the public by the government will go ahead without any change,” said First Vice President Eshagh Jahangiri. 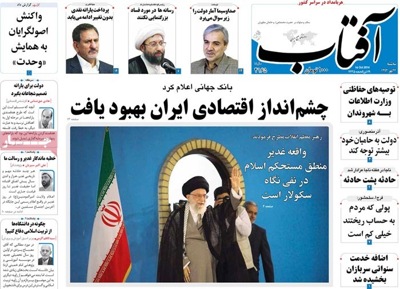 Arman-e Emrooz has put on its front page a number of statements President Rouhani made in a live televised speech: “We will definitely reach an agreement with P5+1. … Our aim this year is to push inflation below 20 percent …. I do not chant slogans, nor do I exaggerate….I have not forgotten any of my pledges.” 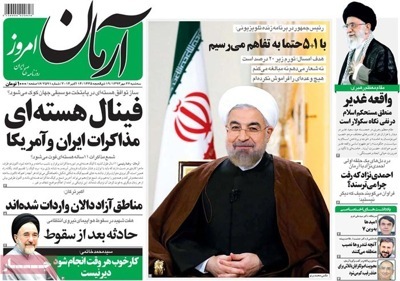 Asr-e Rasaneh: “Natural gas will be supplied to all towns and villages,” said the deputy oil minister. 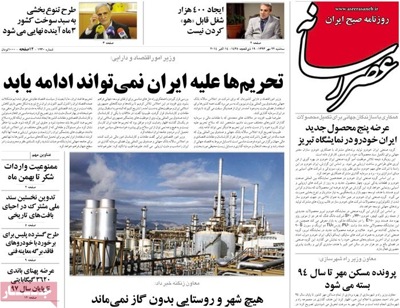 Ebtekar: “If the stage is not set for establishing political parties, small convergent parties can form a front in a bid to internalize democracy,” Chairman of the State Expediency Council Ayatollah Hashemi Rafsanjani said.

Ebtekar: “An individual who attacked Ayatollah Nasser Makarem Shirazi has been arrested.” 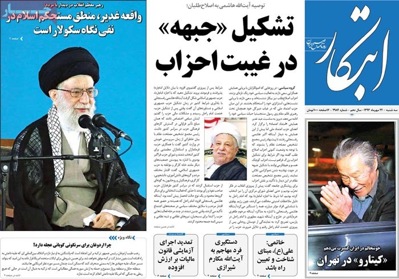 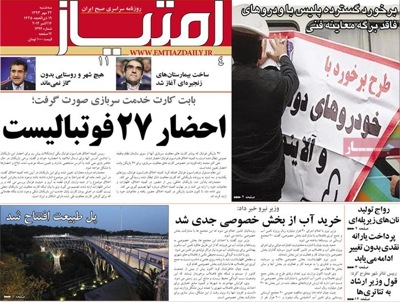 Ettela’at: “Some 400,000 jobs were created between March 21 and September 22, 2014,” said the vice president for Supervision and Strategic Affairs. 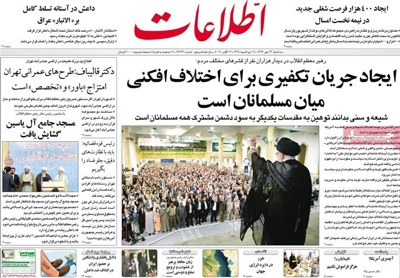 Farhikhtegan: “Al-Qaeda and ISIL were formed to square off against the Islamic Republic of Iran,” said the Supreme Leader. 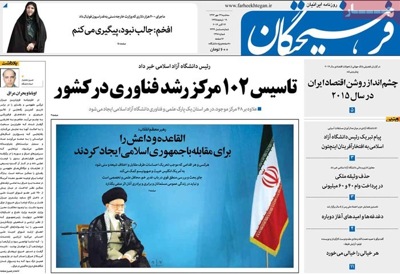 Haft-e Sobh: “Sixty minutes of anxiety in the subway tunnels” is the headline of a report the daily put on its front page to narrate different accounts by news outlets and authorities about the breakdown of a subway Line One train during rush hour on Sunday October 12 which brought about moments of panic for passengers. 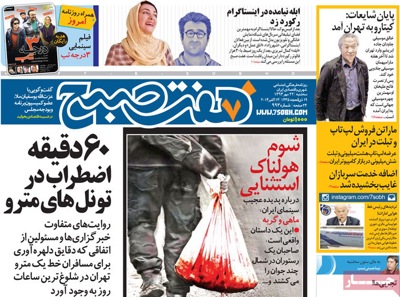 Hambastegi: “What a small group of people wants cannot be inflicted on others,” said Rasoul Montajebnia, a reformist politician, at a gathering of the National Trust Party. 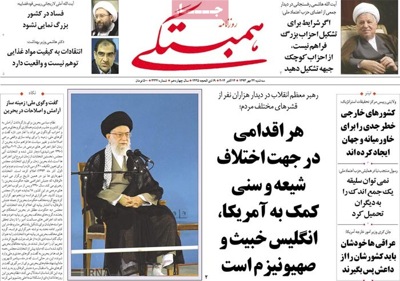 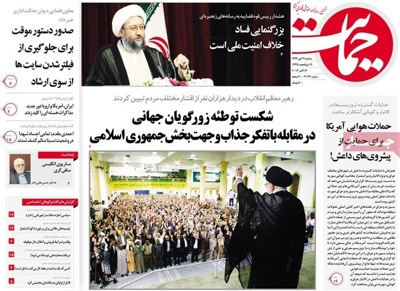 Jahan-e Eghtesad: “In the upcoming round of [nuclear] talks between Iran and P5+1, the European Union should act more independently,” said Foreign Minister Mohammad Javad Zarif in a meeting with the Cypriot deputy foreign minister. 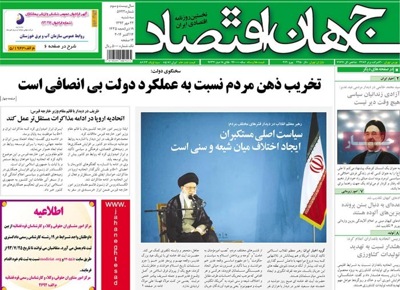 Jahan-e Sanat: “Despite sanctions, Iran’s economy has grown,” the governor of the Central Bank of Iran said at the 2014 annual meetings of the International Monetary Fund and the World Bank Group.

Jahan-e Sanat: “Winning the 2014 Noble Prize for Economics, Jean Tirole from France broke a decade-long American monopoly of the prize.” 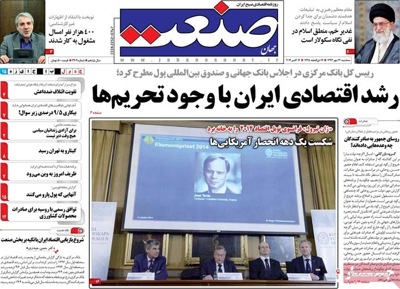 Kar va Kargar: “If Pakistan fails to restore security to the border region, Iran will adopt another approach to do so,” said a senior advisor to the Supreme Leader’s representative at IRGC. 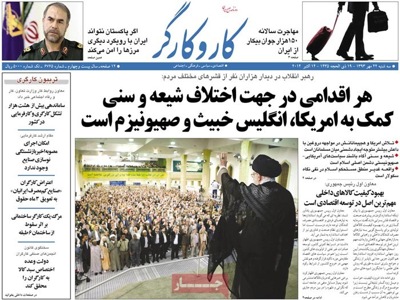 Kayhan: “Reformists are in a fluster after a gathering of principlists to unite [ahead of next year’s parliamentary elections].” 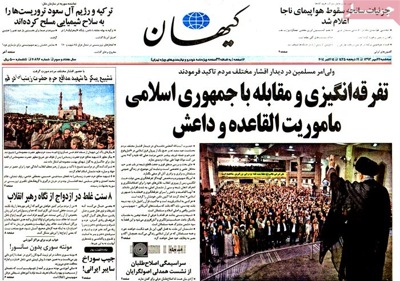 Payam-e Zaman: “The construction of hospital chains has got underway,” said the health minister. 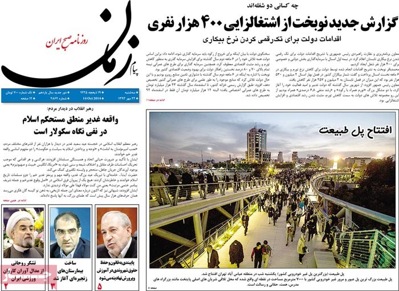 Roozan: “The first gathering of the National Trust Party was held. Former reformist MP Rasoul Montajabnia told the gathering the prime minister Imam Khomeini picked ran the country in the best manner in the worst conditions.”

Roozan: “It is never too late to set the political prisoners free; it would have been much better for those who are under arrest on political charges to be free,” said Former President Mohammad Khatami in a meeting with members of the public to mark Eid al-Ghadeer.

Roozan: “Arson fires in forests are a cover-up for unlawful lumbering,” said Faraj Mostofi, an environmentalist. 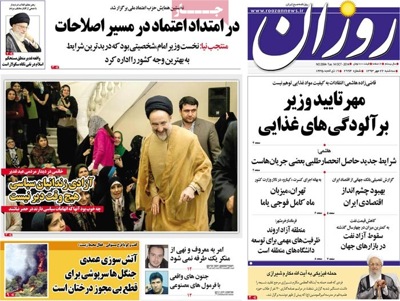 Sharq: “The statistics presented by the government are being doubted through animated programs,” the spokesman of the government said while being critical of the Islamic Republic of Iran Broadcasting.” 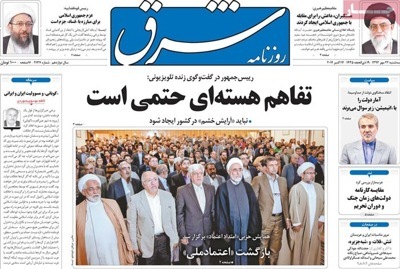