Tabatbaei also described the announcement by Iran and Venezuela of their decision to sign the agreement as a roadmap. He said both countries are under US sanctions and are on the same page regarding many international issues and “this is positive”.

The former Iranian ambassador to Bolivia added that Iran and Venezuela both have good economic potential possibilities and can to somee extent satisfy each other’s economic needs.

He however noted that Tehran and Caracas are trying to get the sanctions lifted. According to him, Iran has shown that it will not leave its old friends and allies even if it normalizes ties with the West but he expressed doubt as to whether that holds true for Venezuela.

Tabatabaei reiterated that the Venezuelan government is seeking to take some measures against its opponents at home led by Juan Guaido and is ready to give concessions to the West and the US and it’s likely that Caracas will even breach the agreement with Iran.

He urged the Iranian government to take the issue into account upon signing the agreement. He also noted that it would be wrong to say the economies of the two countries complement each other but they can satisfy some of their economic needs through the deal.  Tabatabaei said Venezuela will benefit from the agreement more than Iran and it’s going to help Caracas to resolve part of its economic problems. 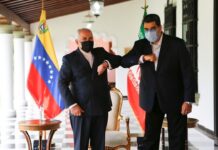