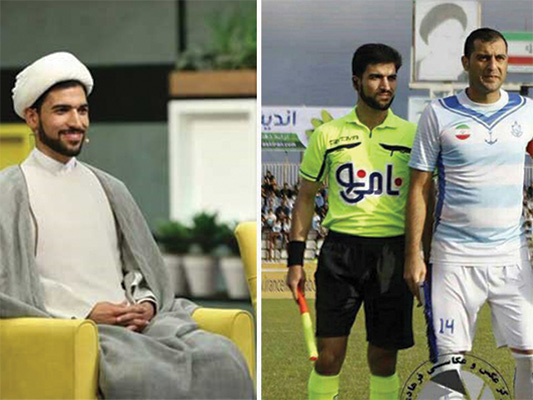 An Iranian clergyman who is also a football referee in the Iran Professional League (IPL) has, in an interview with the Persian-language Fars News Agency, discussed how he manages both careers without either one interfering with the other.

Mohammad-Ali Pour-Mottaqi says he was a referee before he entered the Islamic Seminary School in the central Iranian city of Qom.

“Almost three years later, I entered the seminary and continued my career as a referee at the same time,” he further said.

Pour-Mottaqi says he has judged several key matches, including a recent game between SAIPA and Nafte-Tehran teams in the Premier League, as an assistant referee.

He says he would like to continue his career as a referee at higher levels and wants to be an assistant referee in international matches.

The cleric notes that most other referees and players know that he is a cleric as well.

“Maybe it is believed that seminary students mostly care about studying, but it is very interesting to them when they find out a clergyman is a referee at the same time,” he says.

“I’m a Wushu and full kick-boxing instructor, as well,” he says.

According to Pour-Mottaqi, there is a doctor and an engineer who are referees as well.

“Whoever is working as a referee must abide by the rules and regulations.”

The cleric-cum-referee studies Fiqh (an advanced jurisprudence course) at the Islamic Seminary School in Qom.