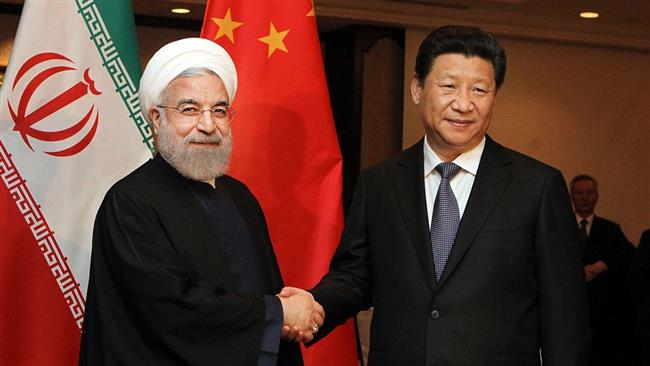 Speaking in a telephone conversation on Monday, President Hassan Rouhani stressed the importance of close cooperation between the two countries on international issues especially in fighting the Cold War and the United States and their western allies' coalition-making against independent countries like Iran and China.

He then referred to the strategic and long-term view of the Islamic Republic of Iran towards relations with China as one of the world powers.

He expressed Iran’s readiness for development of economic cooperation with China and said that the development of relations would further strengthen relations between the two countries in economic and trade relations, including increasing oil and non-oil exports to China.

Rouhani referred to the Hormuz Peace Endeavour (HOPE) initiative proposed by the Islamic Republic of Iran in the United Nations, saying, “Iran is ready to develop China’s cooperation with the western Asia in different issues including the resolution of Palestine’s issue, and in this regard, the HOPE initiative can be the basis for interaction.”

The President went on to appreciate China’s stances and support for the Joint Comprehensive Plan of Action (JCPOA) including in recent talks in Vienna, stating that the unilateral sanctions against the Iranian nation must be lifted and the Arak reactor redesign must be accelerated as per the deal.

President Rouhani also appreciated China’s help with Iran’s fight against COVID-19, expressing hope for continued cooperation between the two countries in this field and accelerated efforts for providing Iran with the vaccines it needs.

In turn, the President of China described relations with Iran as strategic and developing in all fields and stressed the operationalisation of the agreements between the two countries.

President Xi Jinping also referred to regional cooperation between the two countries and emphasised that Iran and China can play an effective role in resolving regional and international issues.

The Chinese President referred to Vienna talks and said that Beijing has always supported the JCPOA as a multilateral international agreement and its full implementation.

“The United States cannot withdraw from the JCPOA and return back to it any time they want. The lifting of all sanctions against Iran is a must for the US’ return to the deal,” he said.

He referred to cooperation with Iran on building the Arak reactor under the JCPOA and said, “We are bound by our commitment in this regard and will accelerate it.”

On the recent attacks of the Israeli regime against the people of Palestine, President Xi Jinping stressed the efforts by the international community to end the killing.