Iranian Art and Culture Put on Display in Belarusian Capital 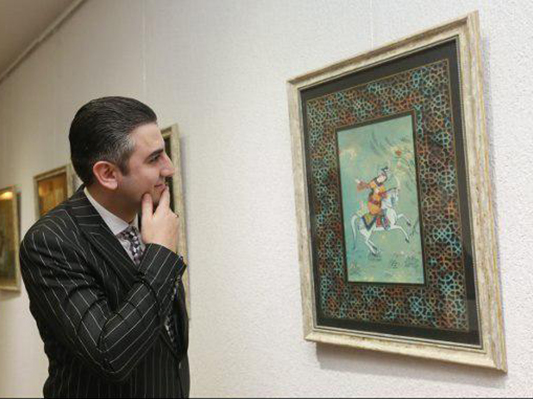 Over 100 artworks have been put on display in Minsk, the capital of Belarus, as part of the Iranian Art Exhibition that opened in the art gallery of University of Culture in Minsk on 30 January.

According to media reports, the exhibition of Iranian culture and art in Minsk is aimed at commemorating the 38th anniversary of the victory of the Islamic Revolution in Iran.

“The victory allowed Iran to more actively develop and demonstrate new accomplishments in all spheres to the world. The accomplishments include advances in nuclear energy, automobile engineering, nanotechnologies, pharmaceutics, healthcare, and culture,” said the head of the cultural department of the Embassy of Iran in Belarus.

“The Islamic Revolution led to a new stage in the development of art. One can say that Iran’s art is unique and is represented by internationally recognized cultural figures, whose works have become world masterpieces,” BelTA quoted him as saying.

All the artworks vividly depict the versatility of Iranian national traditions and the outstanding workmanship of the Iranian artisans.

The exhibition is supposed to get Belarusians to know Iran’s national traditions.

During the opening ceremony Iranian artisans arranged a master class, during which visitors were able to learn some peculiarities of carpet weaving, pictorial art, and calligraphy.

Chairman of the Belarusian Union of Painters Grigory Sitnitsa drew attention to Iran’s great contribution to the world culture and art.

He noted that such Iranian names like Khayyam, Ferdowsi, Rudaki, Saadi, and many other ones are known well all over the world.

Deputy Chairman of the Belarusian Peace Foundation Tadeush Struzhetsky underscored that the large number of visitors, who turned up for the opening ceremony, testifies to the strong interest of Belarusians in Iranian culture.