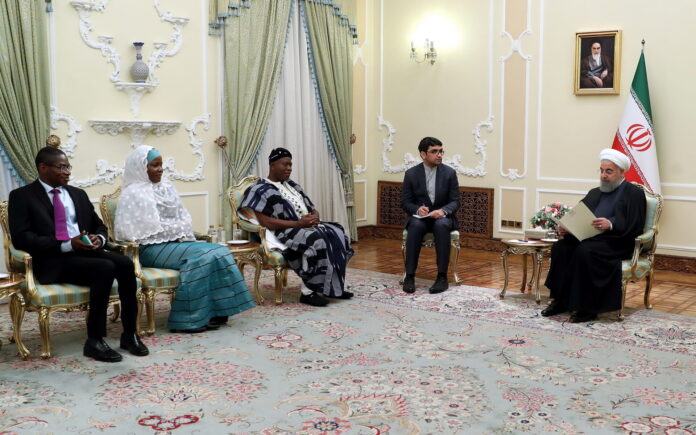 Iranian President Hassan Rouhani says the country is willing to promote its relations and cooperation with Ghana and Cyprus in all economic, scientific and cultural areas.

Speaking in a Saturday meeting with new Ghanaian Ambassador to Iran Sayuti Yahaya Iddi in Tehran, Rouhani said, “By identifying the existing potentialities for promotion of cooperation and activating the private sectors of both countries, the Joint Iran-Ghana Cooperation Commission should create a suitable atmosphere to enhance Tehran-Accra relations.

According to a Farsi report by the president’s official website, Rouhani added, “The Islamic Republic of Iran stands ready to forge closer cooperation with Ghana in the fields of culture, health, and medical treatment.”

The top Ghanaian diplomat, in turn, handed over his credentials to the Iranian president, and thanked Iran for offering assistance to his country, especially in the field of health and hygiene.

He underlined that there exists great potential for promotion of reciprocal ties, adding Accra is keen to further enhance its relations with Tehran.

In a separate meeting with new Cypriot Ambassador to Tehran Andreas P. Kouzoupis, Rouhani said closer banking relations with Nicosia will set the stage for the expansion of mutual economic cooperation.

He said the two countries have cordial and age-old relations, adding the two nations enjoy an ancient civilization history as well.

Elsewhere in his remarks, the president touched upon the Iran nuclear deal known as the Joint Comprehensive Plan of Action (JCPOA), and said the agreement plays a key role in ensuring peace, stability and development in the Middle East region.

“As long as the signatories to the JCPOA remain committed to their obligations, we will keep our side of the bargain as well,” President Rouhani stressed.

The president said Iran favours peace and development in the region and all across the world, adding, “We believe the problem that Cyprus is facing can be solved through dialogue, and Iran supports Cyprus’s independence and [territorial] integrity,” said the president.

The ambassador noted that Nicosia is determined to expand its relations with Tehran on all fronts, namely in the banking sector.