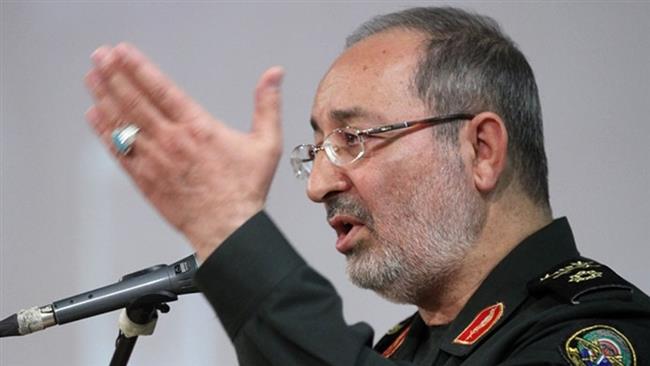 A senior Iranian commander has issued a warning to countries seeking to tailor the situation in Syria in accordance with their political ambitions.

Deputy Chief of Staff of Iran’s Armed Forces Brigadier General Massoud Jazayeri said on Sunday that the recent announcements by some countries to deploy ground forces to Syria are “a political bluff and psychological warfare,” adding, “It looks like the Syrian government and people and the resistance [front] have taken their decision and do not back down in the face of these psychological attacks.”

Saudi Arabia and Turkey have said they could dispatch ground troops to Syria. Such a deployment would come on top of Saudi Arabia’s widely-reported ideological and financial patronage for the Takfiri militants tyrannizing Syria and Turkey’s provision of a supply route for the militants.

In response to the question of whether there was a potential for direct military confrontation between Iran and Saudi Arabia in Syria in case Riyadh does deploy ground forces to the crisis-hit country, Jazayeri said, “We will definitely not let the situation in Syria proceed in line with trouble-making states’ wish to enforce their policies. We will make necessary decisions in the due time.”

Also on Sunday, Riyadh confirmed it had dispatched warplanes to the Incirlik Air Base in southern Turkey, claiming that the move was in line with the so-called fight against the Takfiri Daesh terrorists in Syria.

“Via which place do these terrorists travel to and from Syria other than Turkey? From where do they receive support other than reactionary Arab countries?” Jazayeri asked.

The Iranian commander drew attention to the fact that the talk of troop deployment comes at a time when the Syrian army and popular fighters are making noticeable gains against militants.

The Syrian forces, backed by Russian airpower, have decisively closed in on the militants in various parts of the country, most notably the northwestern Aleppo Province. The Syrian army now intends to advance into the militant-held northern province of Raqqah, which is considered Daesh’s de facto capital.

Syria has been gripped by foreign-backed militancy since March 2011. More than 470,000 have reportedly lost their lives and millions displaced as a result of the violence.

Syrian forces have been battling militants, particularly Daesh terrorists, on different fronts throughout the country. They have recently been making rapid advances against terrorists in operations backed by Russian air cover, which began on September 30 last year at the request of the Damascus government.