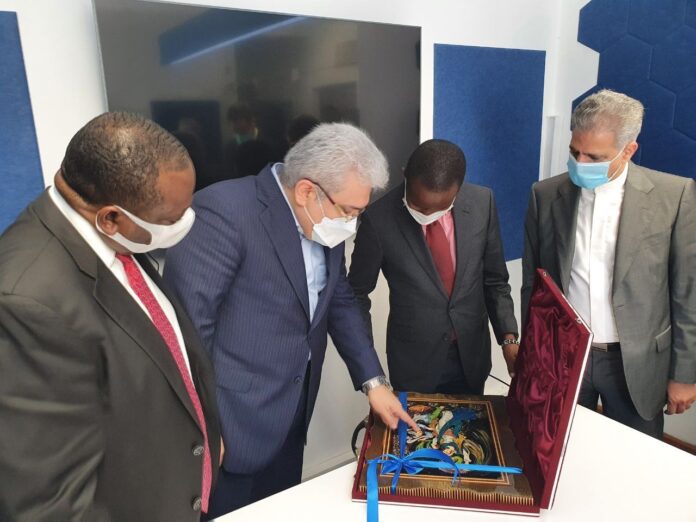 Iranian Vice President for Science and Technology Sorena Sattari has offered to share the experience of the domestic knowledge-based and innovative companies with their peers in Kenya.

Iranian Vice President Sattari, who is leading a scientific and technological delegation in a visit to Kenya, made the remarks in a meeting with Kenyan Cabinet Secretary in the Ministry of Information and Communications, Joseph Wakaba Mucheru, on Wednesday.

In the meeting, which revolved around the promotion of cooperation between the two countries, Sattari said Iran will provide the successful experience of its knowledge-based and innovative companies with their Kenyan peers.

The meeting, held on the second day of the Iranian delegation’s visit to Kenya, was also attended by Richard Ngatia, president of Kenya’s National Chamber of Commerce and Industry.

Highlighting Iran’s remarkable advances in the nanotechnology field, Sattari said, “Iran has been grappling with the US’ cruel sanctions for 40 years. However, not only did the sanctions fail to prevent Iran’s progress, but turned into the best driving force for the (Iranian) scientists and scientific elites that made us gain self-sufficiency in various scientific fields.”

The fact that Iran has had to design and manufacture the whole equipment and products to supply its demands steered the country towards self-sufficiency and homegrown industries, he added.

The products of the Iranian knowledge-based companies meet the international standards, the vice president noted, adding, “All of these products have been manufactured with the best quality and in compliance with the world standards. The powerful Iranian companies can share their experience in this regard with the Kenyan companies applying for it.”

The Iranian vice president explained that such cooperation could happen in the form of transfer of technologies and technical knowledge and selecting competitive prices for the knowledge-based products and services, adding, “Iran’s innovation and technology center in Kenya has also facilitated such interaction.”

He said the Iranian center has been established in Kenya two years after announcement of plans to inaugurate the center, noting that its potential would be employed for the expansion of mutual cooperation with Kenya.

Sattari finally invited the Kenyan technology sector’s officials to visit Iran and observe the growing technological trend in the country and the achievements of the Iranian knowledge-based companies.

For his part, Joseph Wakaba Mucheru praised Iran and the Iranian Vice Presidency for Science and Technology for setting up an innovation center in Kenya, hailed Iran’s advances in the emerging technologies, and expressed the African country’s readiness to use Iran’s experiences in developing the technology and innovation ecosystem.

Highlighting the Iranian knowledge-based companies’ capabilities in advanced technologies, he said Kenya needs to use Iran’s development plans as a model.

Kenya has great potential for growth in digital economy as well as the information and communications technology, the minister noted, saying such capabilities have not still thrived in his country.

“Using Iran’s successful experiences in creating startups and knowledge-based companies is seen as a special opportunity for Kenya,” Mucheru added.

At the conclusion of the meeting, the Kenyan officials visited an exhibition of the Iranian knowledge-based products in the newly-inaugurated innovation and technology centre (IHIT).

Iranian Vice President for Science and Technology Sattari is visiting Kenya for the second time with a 40-strong delegation of representatives of local knowledge-based and innovative companies to pave the way for the export of homegrown knowledge-based products.

The Iranian delegation held business meetings with their Kenyan counterparts on Wednesday as part of a huge event earlier organized for the trip.