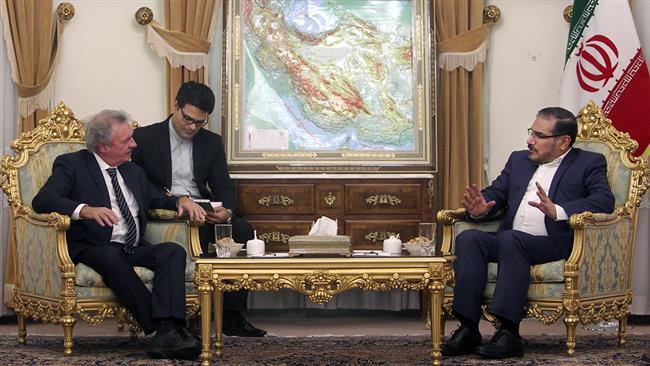 A senior Iranian official says Western countries must make amends for their lost ground in the implementation of the landmark nuclear agreement signed between the Islamic Republic and six global powers in 2015.

“As verified by supervisory bodies, the Islamic Republic of Iran has fulfilled all its obligations but the success of the JCPOA [the nuclear agreement, known as the Joint Comprehensive Plan of Action], hinges on [efforts] by Western countries to make up for their shortcomings,” Secretary of Iran’s Supreme National Security Council (SNSC) Ali Shamkhani said in a meeting with Luxembourg’s Foreign Minister Jean Asselborn in Tehran on Monday.

He added that all parties to the JCPOA must “unabatedly implement their obligations” under the deal.

The JCPOA is an international and binding agreement, he stressed.

Iran and the five permanent members of the United Nations Security Council – the United States, France, Britain, Russia and China – plus Germany started implementing the JCPOA on January 16, 2016.

Under the agreement, Iran accepted to put limitations on its nuclear program in exchange for the removal of nuclear-related sanctions imposed against Tehran.

The SNSC secretary also welcomed the expansion of long-term and lasting cooperation between Iran and Luxembourg in economy, banking and insurance sectors.

He stressed the importance of developing cooperation between Iran and independent countries based on mutual respect and common interests.

“In the era following the [implementation of] the JCPOA and the removal of the obstacle of sanctions, Luxembourg can tap into the broad existing capacities in Iran for investments,” Shamkhani said.

Luxembourg’s foreign minister, for his part, said the JCPOA implementation created opportunities for the expansion of relations between Iran and European states.

Asselborn added that European countries were pursuing an approach, particularly after the deal’s implementation, to strengthen all-out cooperation with Iran and increase investment in infrastructure areas with the purpose of establishing sustainable economic relations.

He also praised Iran’s positive role in fighting terrorist groups and called for more consultations and cooperation between the two countries in this regard.

Also in a meeting with Asselborn, the Iranian foreign minister said the implementation of the JCPOA offered new prospects for the bolstering of relations between the Islamic Republic and European countries.

Zarif added that Iran was determined to enhance cooperation with member countries of the European Union.

Pointing to the favorable grounds for joint venture between Tehran and Luxembourg City, he expressed Iran’s readiness to improve banking cooperation with Luxembourg.

Asselborn also said the two countries would sign agreements to boost cooperation in different fields during his visit.