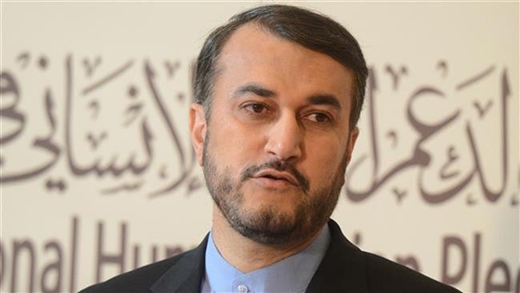 A senior Iranian diplomat says the ongoing crisis in Yemen can be resolved solely through political means.

Hossein Amir-Abdollahian, the Iranian deputy foreign minister for Arab and African affairs, made the remarks during a telephone conversation with Ismail Ould Cheikh Ahmed, the United Nations special envoy to Yemen, on Monday.

“The Islamic Republic of Iran supports the efforts of the United Nations to dispatch humanitarian aid and organize real negotiations between Yemeni groups and parties, and believes that the crisis in Yemen can be resolved solely through political means and dialogue,”Amir-Abdollahian stated.

Yemen’s peace talks, mediated by the UN, started in the Swiss city of Geneva on June 15 and wrapped up on Friday. After the talks,Yemen’s Ansarullah movement lashed out at the Saudi regime for derailing the talks aimed at ending the deadly conflict in the impoverished Arab country.

“Although the UN at this phase of the negotiations did not succeed in establishing a ceasefire, it was expected that serious and urgent measures would be taken to establish green zones and earmark some sea- and air-ports to accelerate the operation of dispatching humanitarian aid” to the Yemeni people, the Iranian official said.

He also stressed Iran’s readiness to send humanitarian aid to the Arab country in coordination with the UN.

Riyadh has been bombarding areas across Yemen since March 26 without a UN mandate and with the aim of undermining the Houthi Ansarullah movement as well as restoring to power the fugitive former president, Abd Rabbuh Mansour Hadi, who is a staunch ally of the Al Saud regime.

The United Nations says over 2,600 Yemeni people have been killed and at least 11,000 others injured during Saudi Arabia’s airstrikes against Yemen.