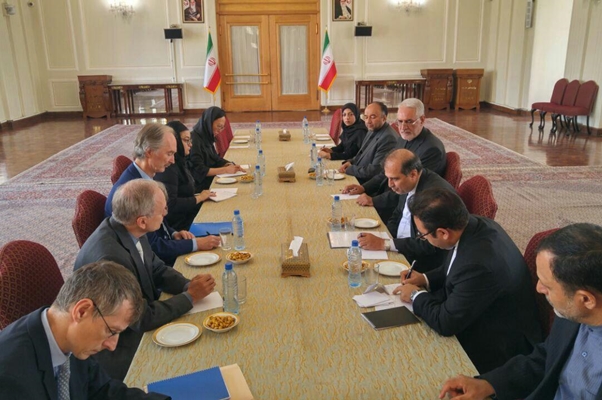 The two sides discussed the latest developments in Syria and the grounds for cooperation between Iran and the United Nations for the settlement of Syria crisis in the meeting.

In the talks, the Iranian diplomat touched upon the political developments in Syria, including the fight against terrorism and the necessity for the expansion of the Syrian government’s sovereignty over the entire Syrian territory, the formation of the Constitutional Committee, the return of the displaced, the exchange of detainees and abductees, the reconstruction of Syria, and a number of other issues.

He also expressed Iran’s readiness, like before, to work in cooperation with the UN to help resolve the Syria crisis.

In turn, the UN Secretary-General’s Special Envoy pointed to his previous meetings with the Iranian officials and to his upcoming visits to a number of countries in order to finalize the line-up and agenda of Syria’s Constitutional Committee. He also conferred with Khaji on the outstanding and unresolved issues surrounding the committee.

Pedersen also expressed gratitude to Iran for its efforts in this regard, stressing the need for the continuation of consultations.