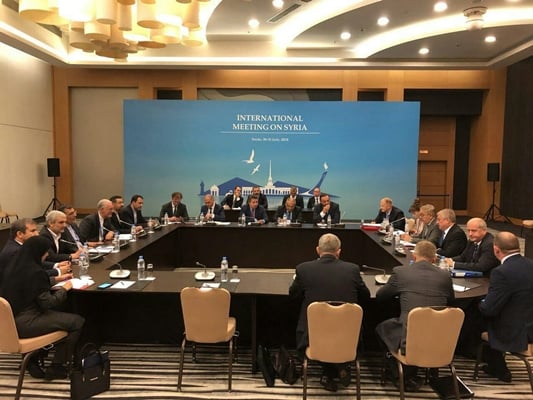 Delegations of Iran, Turkey, and Russia, the three guarantor states of the ceasefire regime in Syria, have held a trilateral meeting in the Russian city of Sochi.

The top negotiators of the three countries also discussed a draft final statement of the 10th international conference on Syria peace, which is underway in Sochi.

Jaberi Ansari also met with the Syrian delegation to Sochi talks headed by Syria’s UN envoy Bashar al-Jafari. During the talks, the two sides discussed the Constitutional Committee and the exchange of detainees. They also conferred on the final statement of the 10th Astana conference.

In the meeting with de Mistura, the two diplomats exchanged view on the political settlement of the conflict, the committee tasked with drafting Syria’s Constitution, and humanitarian dimensions of the Syria crisis, particularly the return of refugees.

Jaberi Ansari and Onal also discussed the latest developments in the Syria crisis, the committee on Syrian Constitution, the return of refugees, the exchange of detainees and abductees, and the final statement the 10th round of Syria talks.