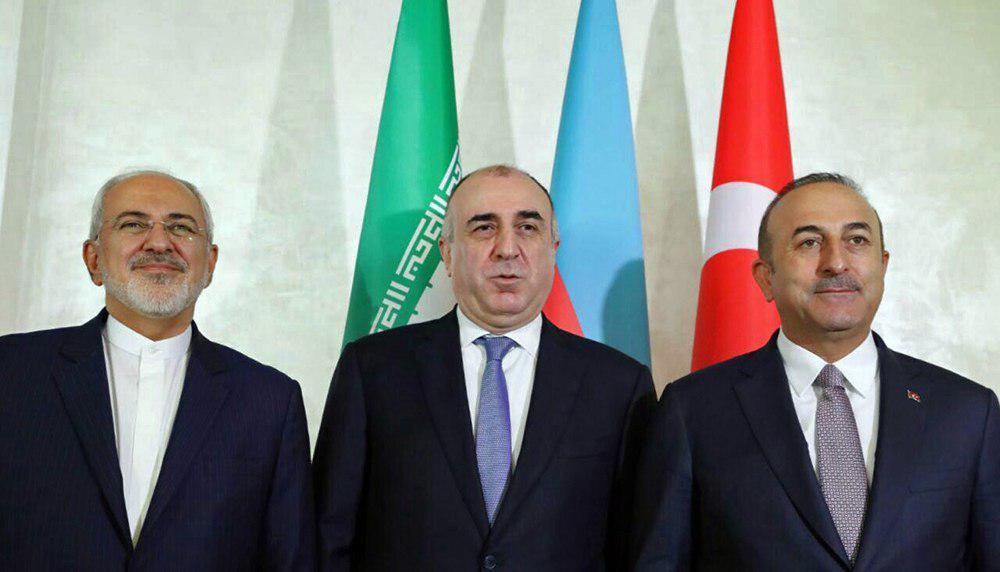 A trilateral meeting between Iranian, Azeri, and Turkish foreign ministers in Baku was concluded on Wednesday with a joint statement that underlines the common interests of the three Muslim countries.

At the conclusion of their fifth trilateral meeting, Iranian Foreign Minister Mohammad Javad Zarif, Azerbaijani Foreign Minister Elmar Mammadyarov, and their Turkish counterpart Mevlut Cavusoglu expressed support for the nuclear deal between Tehran and world powers, the need for unity among Muslim states, and their opposition to any segregationist move.

Emphasized their commitment to the Oroumiyeh, Nakhchivan, Van and Ramsar Statements adopted in the previous Trilateral Meetings of the Ministers of Foreign Affairs;

Reaffirmed commitment to further enhance solidarity and cooperation among the peoples of the three countries based on deep-rooted historical, religious and cultural commonalities and shared values that will serve to strengthen peace, stability, prosperity and cooperation in the region;

Underlined their commitment to the further expand cooperation particularly in the areas that would contribute to economic progress and sustainable development;

Emphasized their common interest to strengthen peace and stability in the region and stressed in the context their commitment to principles of international law, including in particular, respect for sovereignty, territorial integrity, and inviolability of internationally recognized borders and peaceful settlement of all disputes;

Reiterated, in this regard, the importance of the earliest resolution of Armenia-Azerbaijan Nagorno-Karabakh conflict on the basis of the above-mentioned principles;

Agreed to continue close consultations on regional and global issues of common interest at different levels and platforms and within the framework of international and regional organizations, such as United Nations, the Organization of Islamic Cooperation, the Conference on Interaction and Confidence Building Measures in Asia, and the Economic Cooperation Organization, with a view to enhancing regional and international peace, security and stability;

Welcomed the declaration and final communiqué adopted at the OIC Extraordinary Summit on 13 December 2017 in Istanbul, with regard to Al-Quds Al- Sharif;

Agreed to strengthen economic-trade cooperation, to use the existing potential for promotion of investments and trade, as well as to support promotion of cooperation by implementing of the joint projects and programs in the field of energy, transport, banking, telecommunication, industry, agriculture, tourism and environment;

Underlining the significant steps taken to increase the transit potential of the three countries situated on the international transit corridors and geographically favourably located as well as to integrate to the international transit system, stressed upon the importance of further enhancement of cooperation for implementation of the new projects for development of transport infrastructure and increase of transit potential;

Underlining the significance of participation of the three countries in large-scale international transport projects, which are strategically important for increase of the quantity and quality of the competitive transit transportation between the Asia and Europe, for socio-economic development, welcomed the launching of Baku-Tbilisi-Kars railway which creates favourable conditions to use the transit potential of the three countries on ‘Eat-West’, ‘South-West’, ‘North-South’ routes, stressed the importance to take necessary steps for earliest completion of Rasht-Astara railway;

Underlined the importance of strengthening cooperation in the field of civil aviation to reach the high potential as well as to further benefit from the geographical advantages of the three countries; Expressed their willingness to enhance commercial collaborations in the petroleum, gas and petrochemical fields;

Agreed to develop and enhance relations among the banking networks of the three countries and to share experience and information on international banking procedures as well as on combating money-laundering and financing terrorism;

Stressed the importance of continued cooperation among three countries to build and run information infrastructures in order to bridge the digital divide in the region;

Underlined the importance to cooperate within the framework of global and regional economic organizations, to attract the attention of these organizations to the priority spheres, such as trade, transport, tourism, agriculture, communication, and energy as well as to promote and support implementation of the projects in the common interest of the three countries by these institutions;

Emphasized the importance of strengthening cooperation to mitigate and prevent environmental degradation, with a view to attaining the relevant goals of 2030 sustainable development agenda adopted by the United Nations in September 2015;

Agreed to positively evaluate the candidatures of three countries in the international or regional organizations and in this vein, welcomed the candidature of Baku for hosting Word EXPO-2025 in the Republic of Azerbaijan;

Condemning all forms of intolerance and discrimination based on ethnicity, race, religion and belief and underlining the importance of nurturing tolerance, respect, dialogue and cooperation among different cultures, civilizations and peoples and emphasized the significance of the 7th Global Forum of the Alliance of Civilizations of the United Nations held in Baku, Azerbaijan, on 20-25 April 2016;

Underlined the importance to further strengthen cooperation in the fight against terrorism, separatism and violent extremism in all their forms and manifestations, transnational organized crimes and elicit trafficking in narcotic drugs and their precursors, and arms, human trafficking, crimes against cultural and historical heritage, cyber crimes, and illegal migration; took note of the UN GA Resolution A/RES/68/127 entitled ‘A Word Against Violence and Violent Extremism (WAVE)’ initiated by the Islamic Republic of Iran; Stressed their determination not to allow their territories to be used by any people or group of individuals, under any threat and activity against each other strongly condemned foreign support to separatism.
Emphasized their commitment to promote and protect human rights at the national and international level, and declared that the promotion and protection of the rights of all human begins in the world can better be achieved through cooperation and dialogue.

Underscored the significance of Joint Comprehensive Plan of Action (JCPOA) which reflects the success of the multilateral negotiations and diplomacy; acknowledged that the successful implementation of JCPOA requires the complete fulfilment of the stipulated obligations by all the parties for allowing them to fully enjoy benefits provided in JCPOA; taking into account the Islamic Republic of Iran’s adherence to its obligations under JCPOA as confirmed by the International Atomic Energy Agency which is a part of the Resolution 2231 (2015) of the UN Security Council recalled the commitment of all the UN members to contribute the implementation of JCPOA.

Underlined the significant importance of promoting Islamic solidarity to confront challenges facing the Islamic World and stressed intension for more active and effective cooperation to strengthen Islamic fraternity, understanding and tolerance. In this respect noted the significance of the 4th Islamic Solidarity Games for promotion of Islamic culture and moral values around the world held in high level in Baku on 12-22 May 2017.

Stressed on importance to follow up of the decisions taken during the previous meetings as well as the Trilateral Sectoral Cooperation Action Plan for 2016-2018.

Reiterated the importance of holding regular meetings in the trilateral format to continue coordination and cooperation on regional and global issues agreed to hold the next meeting in Turkey.