Iran to US defense chief: Watch your words 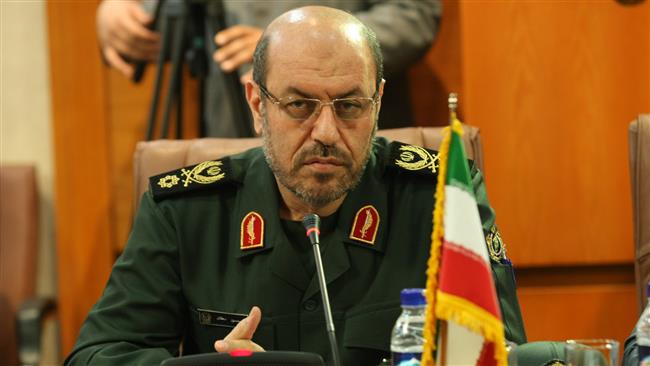 Carter had better save the US more troubles like the ones it is already bedeviled by in Somalia, Afghanistan, Iraq, and Yemen, the Iranian defense chief said.

Iran’s defense minister has warned his American counterpart to mind his words, following accusations by the US official that the Islamic Republic is militarily active in certain countries in the Middle East.

“US Secretary of Defense [Ashton Carter] had better go over his past record in this position of authority and reconsider his bully-like and aggressive stances and talk more sensibly and circumspectly henceforth,” Brigadier-General Hossein Dehghan said on Sunday.

Carter had better “save the US more troubles like the ones it is already bedeviled by in Somalia, Afghanistan, Iraq, and Yemen and [also] refrain from provoking the sentiments of the countries of the [Middle East] region by humiliating [them],” the Iranian minister added.

On Friday, American magazine The Atlantic published an interview with the US defense chief, in which he alleged, “If you look at where the Iranians are able to wield influence, they are in the game, on the ground” in a number of countries.

Dehghan also expressed wonder as to why “the complex and apparently powerful and ubiquitous American intelligence agencies” mislead their authorities into [taking] “unreal, irrational, and aggressive positions.”

The Islamic Republic “is after stability and security in the region,” he said, adding that the regional security will come with the absence of US and trans-regional countries and intervention.

The Iranian official further pointed to the strategy maintained by the United States and Israel to perpetuate insecurity, war, and bloodshed in the Middle East.

“The Americans can no longer hide their hideous and ugly aggressive face behind deceitful slogans. This guise came off years ago and no nation considers the US to be its well-wisher.”

Reacting to Carter’s remarks, Chief of Staff of the armed forces Major General Hassan Firouzabadi said, “We are certain that the US secretary of defense’s remarks are based on wrong information and the absence of correct perception of regional issues.”

“Our policy regarding neighboring and Muslim countries [is that of] Islamic unity, preservation of Muslims’ interests [as well as] independence, and sovereignty of all of them,” he noted.