Iran to test new missiles despite US sanctions: Defense minister 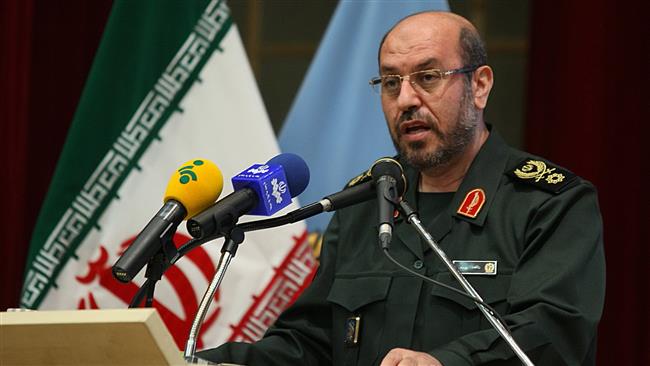 Iranian Defense Minister Brigadier General Hossein Dehqan says the Islamic Republic will unveil new domestically-designed and manufactured missiles in the near future in defiance of new US sanctions against the country over its missile program.

“[Any] attempt to impose new sanctions [against Iran] under irrelevant pretexts is indicative of the continued US hostile policy and acrimony toward the Iranian nation, and a futile effort to undermine Iran’s defense might,” Dehqan said on Monday.

He added that the Islamic Republic of Iran’s missile industry is fully domestically-manufactured and anchored in science and expertise of the country’s defense sector.

“Hence, sanctions against [certain] people and companies will have no impact on the development of the industry, and we will actually demonstrate [their ineffectiveness] by displaying new missiles,” he added.

Earlier on Monday, Iran’s Foreign Ministry said in a statement that the country will continue to enhance its missile capabilities in defiance of the “destructive” US sanctions over the Islamic Republic’s missile program.

“We will respond to such propaganda stunts and disruptive measures by more robustly pursuing our lawful missile program and promoting our defense capabilities and national security,” the statement added.

It further noted that Iran’s missiles serve defensive and deterrent purposes and have not been designed to carry nuclear warheads.

“The Iranian missile program has by no means been designed to carry nuclear weapons and is not in contravention of any international principle,” the statement pointed out.

The US Department of the Treasury said in a statement on Sunday that it has imposed new sanctions on several individuals and firms over Iran’s ballistic missile program, claiming that the program “poses a significant threat to regional and global security.”