Iran to Give Appropriate Response to Any Goodwill Gesture: Rouhani 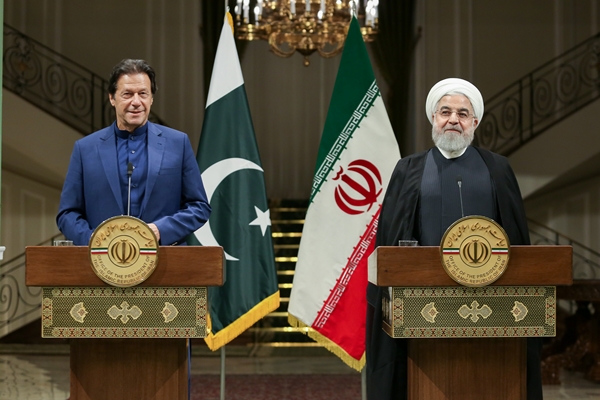 Iranian President Hassan Rouhani says the country will respond to any goodwill gesture with goodwill, and believes regional issues can be resolved through dialogue.

“Any kind of goodwill and good speech will be responded with good, suitable speech,” Rouhani said in a joint press conference with Pakistani Prime Minister Imran Khan, who has travelled to Tehran to mediate between Iran and Saudi Arabia.

President Rouhani stressed that Tehran and Islamabad both share the view that regional issues must be resolved through political ways and dialogue.

“In our meeting, we expressed our concerns about the safety and security of oil tankers, especially what happened to the Iranian tanker on Friday in the Red Sea.”

“We also presented the leads that we have acquired on the issue and stressed that we will continue our investigations until we reach the final conclusion,” said Rouhani.

He said “if a country thinks that it can create insecurity in the region and not receive any response, it is gravely mistaken.”

“Mr Imran Khan made some points about the critical region of Persian Gulf, which we approve. The Prime Minister of Pakistan also stressed that the key to regional issues is ending the war in Yemen, immediate cease-fire and helping the Yemenis, which can be a very good start,” he said.

“Today, we also talked about bilateral relations and deepening economic cooperation between the two countries. We also discussed issues related to security in the two countries’ borders and activating border markets,” said Rouhani.

He said Iran and Pakistan enjoy profound strategic relations and both parties believe that these ties need to continue.

In this meeting, the Zionist Regime’s threats to regional security were explained to the Pakistani officials, said Rouhani.

The President went on to state that the United States’ unjust sanctions against the Iranian nation was another issue that was discussed in the meeting.

“The unjust US sanctions against the Iranian nation is economic terrorism. In this meeting, we discussed how the Joint Comprehensive Plan of Action (JCPOA), as an important agreement, can be returned to its previous states and be implemented.”

“We also highlighted the basic key fact that for the settlement of the issue, the United States has to return to the JCPOA and abandon sanctions,” he continued.

Appreciating Imran Khan for his visit to Tehran, the president said, “We welcome the Pakistani Prime Minister’s goodwill and effort for resolving regional issues so that full peace and security returns to our critical region.”

At the same press conference, Imran Khan referred to the friendly relations between the two countries and said, “The Islamic Republic of Iran has always been a friendly neighbour to Pakistan and supported us in hard times.”

He also appreciated Tehran’s stances in supporting the people of Kashmir.

Any kind of new conflict in the region will be to the detriment of regional nations and to the benefit of foreigners, he said, adding, “The peoples of the region, including those of Afghanistan and Syria, are still suffering from the consequences of terrorism, therefore, no new conflict must begin in the region.”