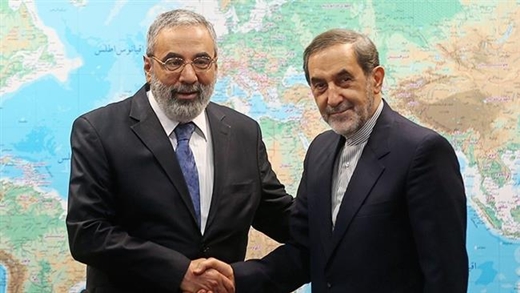 We believe that the Syrian government and nation will emerge victorious in the end and that it will certainly be the Americans and Israel who will suffer defeat, said Velayati.

A senior Iranian official says the Islamic Republic’s ties with Syria constitute the cornerstone of Tehran’s relations with other states in the Middle East.

“Since the beginning of the [Islamic] Revolution [in 1979], relations between Iran and Syria have been strategic and these relations are the backbone of Iran’s aggregate ties with the region, i.e. Iraq, Lebanon and Palestine,” Ali Akbar Velayati, an advisor to Leader of the Islamic Revolution Ayatollah Seyyed Ali Khamenei, told reporters in Tehran on Tuesday after a meeting with Syrian Minister of Information Omran Ahid al-Zoubi.

Noting that the Syrian nation must decide its own fate, he said the approval rating of Syria’s President Bashar al-Assad among the Syrian people has been increasing with time.

“We believe that the Syrian government and nation will emerge victorious in the end and that it will certainly be the Americans and the Zionist regime (Israel) who will suffer defeat,” Velayati said.

He added that Iran rejects as “unacceptable” any regional and international solutions proposed for the Syrian conflict that do not have the approval of the Syrian people and government.

In a statement on Monday, the 15-member UN Security Council endorsed the initiative by the UN special envoy for Syria, Staffan de Mistura, which calls for resolving the Syrian crisis through talks among “intra-Syrian working groups.”

The statement emphasized that “The only sustainable solution to the current crisis in Syria is through an inclusive and Syrian-led political process that meets the legitimate aspirations of the Syrian people.”

Velayati further said, “Iran is the top power in the region and plays an important role in supporting the resistance front against the American expansionism and the Zionist regime’s hegemony and will not allow the US and its allies to infiltrate the region anew.”

Velayati’s remarks came a day after Ayatollah Khamenei said the Islamic Republic will counter Washington’s policies to hold sway in the region to pursue its objectives.

“They are after disintegrating Iraq and Syria,” the Leader said, adding that Washington’s plots will fall flat.

Zoubi, for his part, told reporters that Iran and Syria enjoy cordial relations and hailed the Islamic Republic’s support for Damascus.

He said cooperation between Damascus and Tehran helped the Syrian government and nation resist enemies’ pressure.

Syria has been grappling with a deadly crisis over the past four years. According to reports, close to a quarter of a million Syrians have been killed in the crisis and 12 million people have fled their homes.