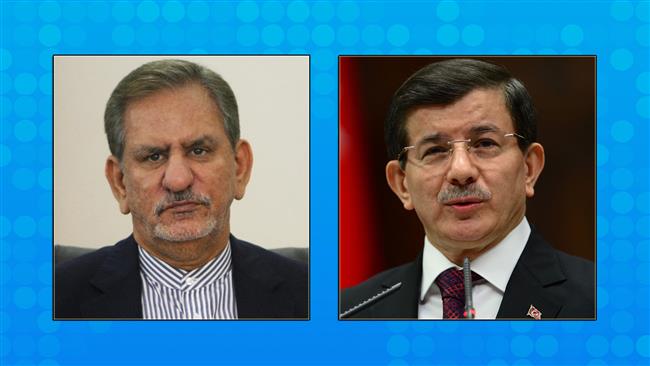 Iranian First Vice President Es'haq Jahangiri has strongly condemned the recent “heinous and inhuman” bomb attack in Turkey, saying Tehran will stand by Ankara in the fight against terrorism.

“Iran and Turkey are both victims of terrorism and the two countries understand the necessity of fighting this ominous and inhuman phenomenon,” Jahangiri said in a telephone conversation with Turkish Prime Minister Ahmet Davutoglu on Tuesday.

A deadly car bomb explosion in the centrally-located Kizilay district of Ankara on Sunday claimed the lives of at least 37 people and injured over a hundred more.

There was no immediate claim of responsibility; however, the Turkish premier announced on Monday that there are strong indications that the blast was carried out by the Kurdistan Workers’ Party (PKK), which Turkey deems as a terrorist organization.

Jahangiri further said cooperation between Tehran and Ankara in the region and the world would be instrumental in uprooting terrorism.

He said terrorist attacks across the world show the expansion of groups that are threatening global peace and security.

The Turkish premier, for his part, hailed Iran’s support for his country in its fight against terrorism.

On Monday, Turkey launched retaliatory air strikes on PKK depots and shelters in the mountainous Kandil and Gara regions in northern Iraq.

Ankara has been engaged in a large-scale campaign against the PKK in its southern border region in the past few months. The Turkish military has also been conducting offensives against the positions of the group in northern Iraq.

The operations began in the wake of a deadly July 2015 bombing in the southern Turkish town of Suruc. More than 30 people died in the attack, which the Turkish government blamed on the Takfiri Daesh terrorist group.