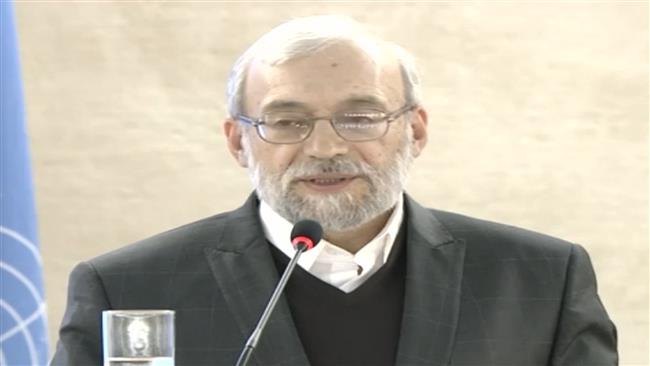 Iran’s top human rights official censures the hypocritical approach pursued by the self-styled advocates of human rights in the world.

Addressing the 31st UN Human Rights Council in Geneva on Tuesday, Mohammad Javad Larijani, the secretary general of Iranian High Council for Human Rights, said self-proclaimed flag bearers of human rights in the world are “close allies” with regimes that deprive their people of the right to decide their future.

He said the so-called advocates of human rights are “totally ignoring the responsibility which they bear” under “basic international human rights documents.”

In a statement on Monday, Amnesty International urged an arms embargo on Saudi Arabia, which is involved in military aggression against Yemen.

On February 25, the European Parliament also passed a resolution demanding the imposition of an arms embargo against Saudi Arabia.

Members of the European Parliament called on EU member states to stop selling weapons to the Riyadh regime as it is accused of targeting civilians in Yemen.

“Saudi Arabia is a top arms client of the UK and France, and there is evidence that these weapons have been used in gross violations of international law in Yemen, where thousands of civilians have been killed since the start of the war,” Alyn Smith, the Greens/European Free Alliance foreign affairs spokesman, said.

According to a recent report by the Stockholm International Peace Research Institute (SIPRI), Saudi Arabia’s imports for 2011-15 increased by 275 percent compared with 2006–10. Britain and France are the main European suppliers of arms to Saudi Arabia. The British government has licensed USD 7.8 billion in sales of arms, fighter jets and other military hardware to Riyadh since Prime Minister David Cameron came to power in 2010. France also signed USD 12 billion in contracts with Saudi Arabia in 2015 alone.

Larijani highlighted the double-standard policies adopted by regimes that deprive their citizens of the “very basic and minimal right to participate in shaping their destiny” while claiming “adherence to human rights.”

Larijani touched on Iran’s recently held twinned elections for the parliament and the Assembly of Experts with more than 60-percent voter turnout.

He said the two elections serve as an example for other countries in the world to follow.

He said that Iran’s elections “offer the people of the Islamic world a new option: to reform their society, they are not obliged to choose between secular-liberal democracies or sink into extremism.”

Iranian Interior Minister Abdolreza Rahmani Fazli on Monday announced the end of vote counting in the 10th parliamentary and 5th Assembly of Experts elections with an overall turnout of 62 percent nationwide. At least 33 million out of the 55 million eligible voters took part in the two votes on Friday.

Larijani reaffirmed Iran’s longtime position that ongoing crisis in Syria must be resolved through a free election and not militarily.

“Iran has always insisted that there is no military solution to the Syrian crisis. Only ballots – not bullets – can ultimately usher in a new era in Syria,” said Iran’s human rights chief.

He stressed that Iran has constantly “advocated an immediate ceasefire and an end to the bloodshed” and “dialogue between the Syrian government and the opposition groups who reject terrorism.”

The foreign-sponsored conflict in Syria, which started in March 2011, has claimed the lives of some 470,000 people and left 1.9 million injured, according to the Syrian Center for Policy Research.