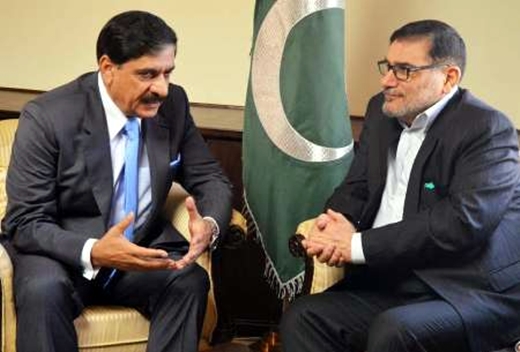 The change of governments in Pakistan won’t interfere with the strategy of the Islamic Republic to expand all-out ties with Pakistan, Shamkhani said.

Iran is ready to take steps toward cooperation with Pakistan on the political, security, defense and economic fronts, Secretary of the Supreme National Security Council Ali Shamkhani said Wednesday at a meeting with Lieutenant General Nasir Janjua, the National Security Advisor to Prime Minister Nawaz Sharif.

What comes next is the translation of a report by the Islamic Republic News Agency about what else Shamkhani said at the meeting:

Ali Shamkhani, who is in Pakistan for a two-day state visit, further said, “Iran and Pakistan’s shared security and defense concerns over key questions, including the fight against terrorism, border security, extremism and violence and regional security cooperation provide perfect ground for closer bilateral cooperation.”

He hailed the wise move of the Pakistani government not to get involved militarily in the Yemeni crisis and said, “Through dialogue, understanding and rejection of non-peaceful solutions, Muslim countries should not allow their differences to pave the way for the interference of countries which do not have the best interests of Muslims at heart.”

The Iranian official added, “The change of governments in Pakistan won’t interfere with the strategy of the Islamic Republic to expand all-out ties with Pakistan.”

He underlined the need for adoption of joint solutions to counter foreign-backed terrorist groups along the Iran-Pakistan border and said, “Some trans-regional countries along with their regional allies seek to cause divisions between Tehran and Islamabad through stirring up border insecurity at the hands of terrorists.”

Shamkhani, who arrived in Islamabad early Wednesday, is also scheduled to meet with Prime Minister Nawaz Sharif and his advisor for foreign affairs Sartaj Aziz.