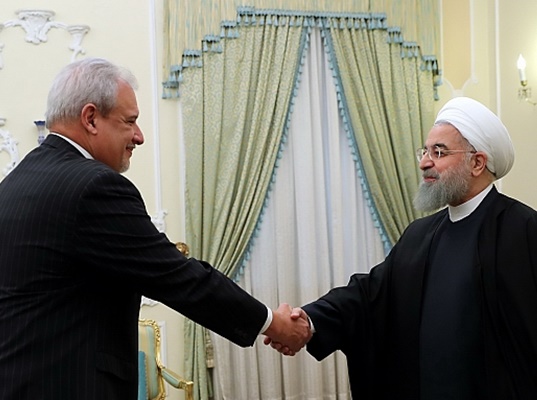 Speaking in a Saturday meeting with new Cuban Ambassador to Tehran Alexis Bandrich Vaga in Tehran, Rouhani said Tehran-Havana relations have been at a very good level after the 1979 Islamic Revolution.

“After the revolution, Iran and Cuba have faced common conspiracies, and undoubtedly, the name of late Imam Khomeini as a revolutionary Muslim leader, and Fidel Castro as one of the world’s revolutionary leaders have gone down in the history of world revolutions,” the president told Bandrich Vega while receiving his credentials.

According to a Farsi report by the president’s official website, Rouhani said Tehran and Havana have good potential for promotion of relations on different fronts, particularly economy, science and energy.

He said Iran is opposed to the use of sanctions as a tool against nations, saying sanctions are an inappropriate and old lever to be used.

“The Islamic Republic of Iran is against the imposition of unfair sanctions against independent nations, including Cuba, he said.

The top Cuban ambassador, in turn, praised Iran’s effective role in establishing stability and security in the region and in the world.

He said Iran has a special status in Cuba’s foreign relations, adding Havana is set to forge closer ties with Tehran in all areas.

The Cuban ambassador said his country believes the promotion of ties with Iran is the best tool to counter unfair sanctions imposed on the two countries.

At this juncture when the US seeks to impose its viewpoints on the world through bullying, said the top Cuban diplomat, the enhancement of ties among independent and freedom-seeking nations like Iran and Cuba can be very effective in confronting such bullying behaviour.

“Tehran and Santiago enjoy very good potentialities in different fields, which should be tapped in order to develop and boost joint trade and economic relations and cooperation,” said the president in the meeting where he also received the new Chilean ambassador’s credentials.

Rouhani said the private sectors of both countries should be encouraged to boost cooperation and make joint investments to further expand relations between the two nations.

“Today, due to the Iran nuclear deal and the removal of sanctions, a suitable atmosphere has been created to further boost Tehran-Santiago ties, and I hope that climate will be utilized in the future to see further development in bilateral ties,” President Rouhani said.

“We want lasting peace and stability as well as a campaign against terrorism and violence in the world, and we believe all countries should work together closely in this regard,” said the president.

He underscored that non-proliferation of weapons of mass destruction in the world is of utmost significance, saying, “Today, the arms race in the world and the threats posed by some states have caused concerns for all countries and nations in the world.

President Rouhani said Iran and Chile can cooperate and hold consultations in the fields of peace and security and global development.

The top Chilean diplomat, in turn, touched upon the good relations between Iran and Chile as well as the numerous potentialities in both countries for promotion of reciprocal ties. He also underlined the need to remove banking hurdles in order to boost mutual trade and economic relations, and said Chile’s private sector is willing to invest in Iran.

He said Chile attaches great importance to the promotion of global peace and security as well as the enhancement of international cooperation with Iran as an important and influential country.