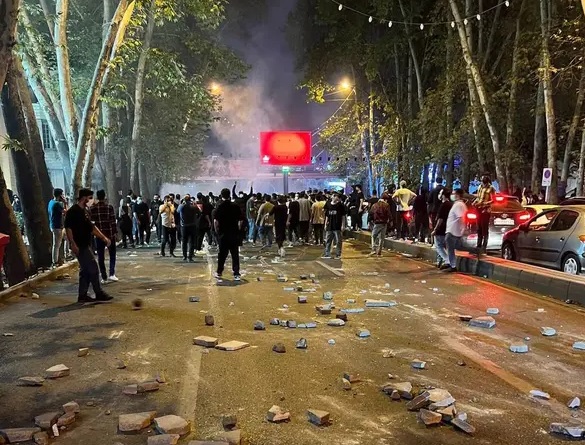 Some Iranian towns and cities, including the capital, Tehran, reportedly witnessed another day of protests and riots on Saturday.

According to ISNA, protesters took to the streets despite the fact that officials had promised to meet their legitimate demands.

Clashes also broke out between protesters and security forces in several areas.

The protests followed calls on social media for people to hold rallies and were held amid heavy police presence.

Security forces had been deployed in droves across Tehran, especially in the vicinity of universities, to monitor the situation.

The protests were coupled with sporadic riots where rioters vandalized public property.

They damaged traffic signs and set fire to trash cans and police kiosks, among other things.

Most businesses in numerous neighborhoods in the capital had closed for fear of being vandalized.
The riots were organized by anti-revolutionary elements.

In addition to vandalizing public property, rioters intended to disrupt traffic and interfere with commuters.

The bloodiest event happened when a young man was shot dead inside his car in the western city of Sanandaj.

Police has described the incident as a false-flag killing by anti-revolutionary operatives. One security force was also killed during the riots in Sanandaj.

Angry protests erupted across Iran over the death, on September 16, of Mahsa Amini, a 22-year-old woman, who was in the custody of morality police for breaching the Islamic Dress Code.

Peaceful demonstrations in Iran have been eclipsed by a set of riots, which have seen thugs engaging in deadly acts of violence and vandalism.