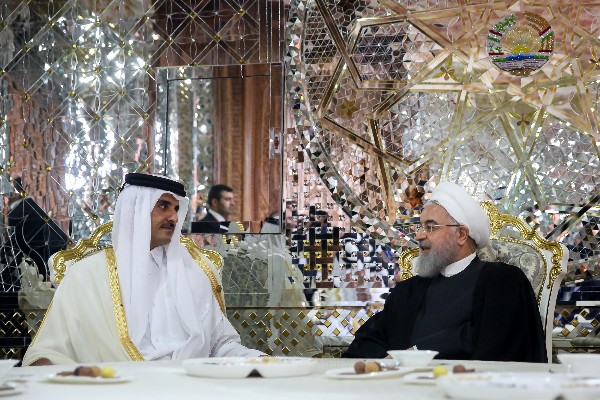 Iranian President Hassan Rouhani has highlighted the “interwoven” nature of security in the region, saying that bilateral and multilateral consultations and further cooperation are the only ways to settle disputes and resolve regional problems.

Rouhani made the remarks on Saturday in a meeting with Qatari Emir Sheikh Tamim bin Hamad Al Thani, which was held on the sidelines of the 5th summit of the Conference on Interaction and Confidence Building in Asia (CICA) in the Tajik capital Dushanbe.

In the meeting, Rouhani said bilateral, multilateral and further cooperative consultations are the only ways to reduce differences and resolve regional problems, and the Islamic Republic is always ready to contribute to this objective.

The president noted that expansion of relations with neighbouring and friendly countries, in particular Qatar, is in line with the priorities of the foreign policy of the Islamic Republic of Iran.

“Stability and security of the countries of the region are interlinked and we are after the rule of moderation, brotherhood, wisdom, and prudence in relations between countries.”

“The Muslim world needs unity and integrity, and the two countries can undoubtedly work together in regarding this,” he added.

For his part, Sheikh Tamim bin Hamad Al Thani said “Qatar believes that solving all the differences in the region is possible only through dialogue, collective co-operation and use of political resolutions.”

The Qatari Emir also said that Doha is ready to develop ties with Tehran in all areas of interest.

President Rouhani has travelled to Tajikistan to attend the CICA summit – which has gathered together leaders from 27 countries in the grouping and 13 observer states and international institutions.